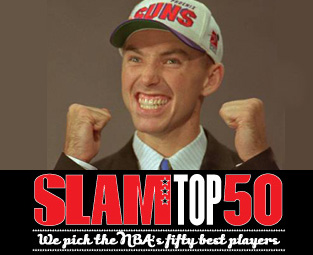 In his own words

He’s the reigning back to back MVP, a man who has put himself in Hall of Fame company and has transformed the Suns and the game itself. He might be the best leader in the NBA. His shortcomings have been the lack of defense and questionable durability but other than that there’s not much you can’t L-O-V-E love about his game. He brought funtime back and the style of play he runs out in Phoenix has inspired David Stern to change the rules.

Strangely, as his play has improved, and he’s picked up somewhat controversial hardware – sparking a racial debate along the way – people have been glorifying him or tearing him down and putting him on a pedestal to such a degree that it’s hard to remember that he might be the coolest, most down-to-earth, active sports legend today. It’s wierd to think of him as an icon, but that’s what he is. Here is a collection of Steve Nash quotes. A point guard that has been revolutionizing today’s game, and a likeable, intelligent guy off the court.

“I think Canada is similar to the States, but I think even more so built on immigrants. We’re still allowing a lot of immigrants, and we’re very tolerant and accepting of that. And not only is it very diverse, but also, I find that Canada is not very segregated. People of American culture tend to stay to themselves more, or at least in their own part of the community. While here’s it’s very diverse. I kind of enjoy it; I think it’s very fun to celebrate that diversity. But I’m sure the States has that in many places. My experience is just that our infrastructure, in that way, is a lot different.”

“I’m lucky that I’m normal sized and I don’t really stand out so much. People already knew pretty much who I was, but people are so excited about the MVP. People here, in the street, are excited about it, excited that I won.”

“I have to say I’ve worked very few days of my life. I used to have to cut the lawn, and when I was in junior high school, I worked at a concession stand at a stadium.”

“I am a huge believer in giving back and helping out in the community and the world. Think globally, act locally I suppose. I believe that the measure of a person’s life is the affect they have on others.”

“I am not too accusatorial or defensive by nature. I have always been kind of philosophical about it, remembering that it is just a game. People take these things too seriously.”

“I have definitely gone through my ups and downs and faced my adversity and my nay-sayers, but managed to do all right. It is a pretty classic tale.”

“My free time at home is usually spent emailing, listening to music, reading and talking on the phone. I wish I was on the phone less, but I have been fortunate to stay in touch with so many incredible friends.”

“My ideal day would be to get a good work out in, listen to music, talk to my family and friends on the phone, read and go to a good movie.”

“People have always doubted whether I was good enough to play this game at this level. I thought I was, and I thought I could be. What other people thought was really always irrelevant to me.”
“The NBA has the best point guards in the world, so it is important that I come ready to play every night.”

“Well, my favorite band is Radiohead. But, you know, I am pretty fascinated in general with music. I love music. It is definitely an interest.”

“You should be able to voice your opinion and respect the voice of the other side. You should be willing to educate yourself and know what it is you’re dealing with.”