79-76. Welcome to the Eastern Conference Finals 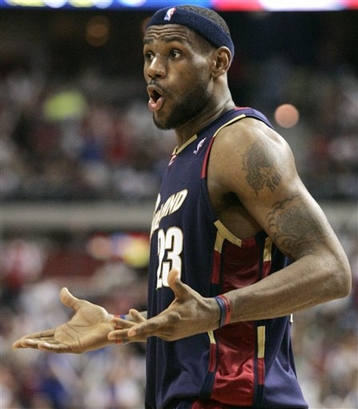 But he did not.

LeBron was held to just 10 points, and yet the Cavs led for a good portion of the game. The Pistons forced the ball out of his hand until that final play where he forced the ball out of his own hand. It might have been the smart basketball play to make – finding the wide open shooter for the win on the road as opposed to merely tying the game so Detroit could win it or go to OT – but LeBron might take a little beating here for being afraid to go to the free throw line. I will use the ultimate cop out and say “It’s only one game.” Let’s see what happens the next time a game in this series comes down to one final possession for Cleveland. Does LeBron have to be counter-intuitive and force the superstar play instead of the smart basketball play? Jake says that LeBron is shaking off the effects of second semester senioritis. Welcome to the real world, Mr. James. It’s different.

If LeBron had been fouled on that play, he would have gone to the line for the first time in the game. Detroit is playing physical defense and yet he’s not shooting free throws as a counter? That is strange. Also, Rasheed had 7 blocks!

Vincent Thomas, who covered the first round Nets-Raptors series for us, will have the write-up of the game. Jake is on Game 2, and then we’ve got someone else in Cleveland for games 3 and 4, and so it goes. All hands on deck, as they say.

And now… since I missed the Heroes finale last night, it’s time for an A.M. viewing. There is no way I could get through this day without someone spoiling it for me. How do you stop an exploding man? I’ll know in about an hour.