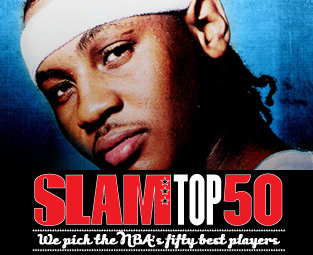 Carmelo is at an interesting place in his career. The natural rivalry was supposed to be him and LeBron until the end of time, and Melo was actually a bigger winner than Bron at first, getting to the playoffs his rookie year and both years after that. But as you know, Dwyane Wade goes to the playoffs every year and already has the ring and LeBron has already won more playoff series than Melo. The stories we have been told all summer lead us to expect and ultra-motivated Carmelo Anthony, who will have to step up to share the light with the WadeLeBron machine.

Here’s why Melo is so great or valuable as a player. Even though he’s more of a scorer than all around force like some of his peers, Carmelo is dominant as an offensive force. How many game winning shots did he hit night after night for the Nuggets last year, carrying an injury ravaged squad to the playoffs? He’s still only 22 years old, and as evidenced by last season and this summer, he’s still getting better. In college he did what no Freshman should be able to, leading a team to the National Championship, and leading the way with his scoring pretty much since he first stepped on the Syracuse campus. That continued when he got to Denver. People sometimes make him out to be this trouble maker for some minor scrapes with the law, or they say that he’s more flash than substance, but the bottom line is that he’s a winner and he is still getting better. As long as he doesn’t pick up totally uncalled for technicals under this zero tolerance regime.