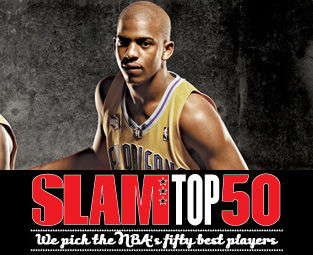 When Sam and I came up with the qualifications for this list, we purposely tried to keep it as vague as possible. Not because we wanted to confuse you all, but because we wanted to be able to move guys around for various reasons. And yesterday, when we ran Kevin Garnett at number 10 on our list of the 50 best players in the NBA, I knew there was going to be a little bit of beef from you guys.

Sure enough, there was. Some of you rightly anticipated that Chris Paul was going to be ranked ahead of KG. Understand, we didn’t do that to elicit response — we did it because we felt the rankings belong that way.

Now, I understand people being upset that KG barely cracked the top ten. And if you look at his numbers, they’re unbelievable, as is his ability to play any position on the floor, his oversized personality, the whole package. He’s definitely amazing. But…

Well, more on that in a minute. First, back to Chris Paul. When Chris started tearing up the NBA last season, I was as surprised as anyone. I thought he’d be good, but I didn’t think he’d be that good. He’s fast, he’s quick (yes, they’re different things), he can defend, he’s a leader…blah blah blah. You know what he can do, right? There’s a reason he was the runaway winner of Rookie of the Year (and the winner of EVERY Rookie of the Month award last year).

What really struck me about Chris was watching him out in Vegas this summer at the USA Basketball training camp, both during the scrimmages and games: No matter what was happening, how well or how badly Team USA was playing, Chris was always on the ball. And I don’t mean that figuratively, I mean it literally: He was always right there around the ball. Even when plays were being run away from him, a pass would be made and CP3 would all of sudden be right there, getting a hand or a finger on the rock.

Another thing that impressed me about Chris was when I was talking to Hornets coach Byron Scott this summer. “One moment I knew when CP was special was when he came up to get the Rookie of the Year award,” recalled Scott. “The day before the ceremony I’d given him a napkin with some numbers and goals for CP for the next season written on it. Knowing him like I do, I knew he would take it seriously. The next day when he was receiving the award, I made a little speech and asked if he had memorized the paper, and he had not only memorized it but he pulled it out of his pocket — he was carrying it with him.”

Back to KG. In May of this season, KG will turn 31 years old. He’s in his 11th season, and he’s due to make $67 million over the next three seasons. While we’ll never deny his talent, his contract and his advancing age conspire to make him prohibitive to most NBA franchises. Conversely, Chris Paul is locked up under his comparitively cheap rookie deal through 2010, and in May of this season, he’ll turn 22 years old. When you measure these two players, it’s really a case of cost-reward, and in this case, it’s not even close.