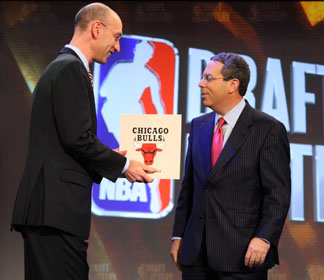 Yes, Jay is a minority owner of the New Jersey Nets. Yes, he’s good friends with everyone from Michael Jordan to LeBron James and every Nike endorsee in-between (and apparently O.J. Mayo, too—whoops!). But did we really need to hear his opinions on who the Nets are interested in (Beasley and Rose, shocking), especially when he didn’t seem even remotely interested in giving them?

Burke’s pre-lotto-show interview with David Stern was markedly better, as she hit him with a one-two punch of the age limit and the O.J. Mayo scenario (he predictably praised the first and patronizingly deflected the second as being the NCAA’s problem). That said, I’d still rather see Doris stranded on a desert island than on my TV screen for the rest of the playoffs.

We have the usual bizarro game-show format for the seating, with a diminutive “lucky” fan from Sacramento sitting alongside Larry Bird and Jay-Z. Burke engages them in a little Trebekian chit-chat, and you know basketball lifers like the Bucks’s John Hammond can’t stand any of it. Rudy Gay, Dwyane Wade and Kevin Durant have probably never been so bored in their lives.

The Bulls have moved into the top three, deservedly displacing the carpetbagging Sonics. And so much for the Sacramento luck lady. Although if she was so lucky in the first place, she probably wouldn’t be a Kings fan.

Well now. I’d write more, but I have to go to Chicago and help Kirk Hinrich pack.