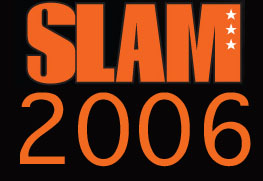 ‘Tis the season for every site on the internet to look back at the year that was. You’ve already seen those recaps of what happened on the court and in the NBA. Instead, I’d like to take you on a journey through the year of slamonline. We switched from the old familar look with the grey background and black font that Lang started back in 2001, to what you see today.

2006 has been a crazy year in terms of how sports is being covered. Some of that is from blogs, some of it is from the over-the-top explosion of the availabilty of information. You used to have to really seek out news to find stories. Now it’s delivered to your computer in tidy packages with summaries, and it’s easier than ever to navigate your way around.

This is more the year in slamonline than the year in basketball. Although the two will keep converging. This is just a 6 month look back, cause those 6 months are harder to find since they are on our old site with the old look. Archives, they say. So, here is the best I could do as far as shortening to make the summary as tight as possible. Enjoy the ride.

Jerome James has too much fun on New Year’s Eve… Lang’s Georgia Bulldogs let him down against West Virginia as Ryan, Russ, and I were at MSG for the Knicks triple OT thriller victory over the Suns, which Walt Clyde called “the most provocative game of the year”… Lang started bashing Raptors announcer Chuck Swirsky and brought up his theory about how it’s stupid to rebuild through youth because veteran teams win championships. 5 months later the Heat proved him right… I wrote SLAM BOWL VIII: Comeback Mountain, which I took personally and won in controversial fashion with Lang whining about me breaking a code of honor… The Giants fell flat in the playoffs and Khalid and Lang let me and Ben know all about it… Lang joined the NBA.com blog squad… Kobe started his run of 40 point games, which was a big deal at the time. Little did we know that 81 was coming… On his SLAM Radio segment, K.O.R.E, Khalid talked about how he refused to see Glory Road because it’s racist and over-promoted… Jake and Russ went to a Knicks game together and wrote separate reports, beginning their courtship period… Insubordinate and teamless Ron Artest showed up at a Lakers game wearing shades and sitting courtside… Steve Francis was suspended by the Magic for conduct detrimental to the team… Kobe and Shaq made up the same night Bynum and Shaq dunked on and shoved each other… Lang wrote an SI column about how the Manning brothers are losers. Tru dat… Antonio Davis went into the stands and were forced to make a big deal out of it… Melo was hitting game winning shots every night while LeBron was choking… Lang invited people to email him their weirdest dreams. It got weird… Juanny had his colon removed… I got my car inspected at the dealership, which was the dumbest decision of the year… 81 points… Lang left his Sidekick in a taxi, and we had to go downtown to reclaim it thanks to a saint named Karen… Lang broke down Kobe’s 81 point game point by point… Isiah was sued for sexual harrasment… Ron Artest was traded for Peja… Me and Lang started playing EA Sports MVP Baseball, which turned us both into (virtual) hardcore college baseball fans. We also spent some time at the ESPN Zone with two legends, Jon Bon Jovi and John Elway… JR Rider was arrested for kidnapping a female aquaintance… Clement Chu talked with Ron Artest, who had recently painted his own shoes to match his new team’s color… The Birdman flew too high…
FEBRUARY

Lang goes to a Pacers-Wizards game in D.C. and takes a surveillance photo of the White House… All-Star starters were announced and Epiphany Prince scored 113 points in a game… The Seahawks were robbed by the refs in the Super Bowl, but I made some money from it… Lang admits that he parked his car in D.C. with the window rolled down and lucked out by not getting robbed… The Knicks lost a game when Jalen Rose couldn’t get the ball inbounds against the Clippers… Lang started hyping up the Nicholas Cage flick National Treasure… Monster snow storm hits NYC. I was in Puerto Rico and missed it… Darko traded to Orlando… Russ broke Cal Ripken’s record of most consecutive games played, if by games played you mean terrible Knicks games attended… Bassy brought a gun on a plane… All-Star Weekend in Houston. Lang observed some Girls Gone Wild action. Nate Robinson missed 100 dunks… We post our behind the scenes video of Kobe nearly being bitten by a poisonous snake… Lang defends the Steve Francis trade just to be different… Jason McElwain gets hotasapistol… Khalid contemplates using violence against Billy King… A fan tries to say KG hurt him by throwing a ball at him… AI is left off the Olympic team…

The D.A.Y. debuts and I start working in the morning like normal people… Tim Thomas signs with Phoenix… Three Six Mafia wins an Oscar… Mo Cheeks thinks about punching Ryan in the face… Lang surveys some of the Sacramento Kings at a Nets game and they say they’d take Vince over LeBron for one game… I unveil a separated at birth of Adam Morrison and Tina Fey… The cops try to shut down SLAM Radio by pulling me over the night before the show to try and scare me… Omar is a guest on SLAM Radio and he talks about the different races of Thundercats… I’m Just Saying… The Steve Belkin saga dragged on… Tony Soprano gets shot by his Uncle as March Madness begins… My apartment is used in a Details magazine photo shoot, because I have an HDTV that is the only piece of “art” in the place and it is at such an angle that I look up to it like an altar for God… Larry and Stephon are in a war of words… The mid-majors and little guys expose Billy Packer for the fraud that he is… Lang went down to New Orleans, still devastated by Katrina… JJ and Adam shed tears… Nique makes the Hall of Fame.

Ben Osborne was at the Final Four for George Mason and Gator mania… My April proclomation: when I say “The Old Mets”, I’m assuming that this year things will be different… And few days later: Five hours before Billy Wagner joined the long list of Mets “closers” that couldn’t get the job done, I was engaged in a war of words with a Yankee fan friend about the whole “Enter Sandman” thing. Now I know, Rivera is a God, and anyone that goes against him is bound to get struck by lighting… Julius Hodge is shot after leaving a Juelz Santana concert… Proof of D12 is shot and killed… Ray Allen snitches to the league office on Bruce Bowen… I start hyping up Bonds on Bonds… I start watching season one of 24. Late to the party… We make arguments for about 10 different people to be MVP on I’m Just Saying… Lang is excited for Shareef finally making it to the playoffs… I go to the eye doctor because Bausch & Lomb tried to assassinate me… Regular season ends… Ben spots Nate Robinson playing streetball at the West 4th street court… Lang goes to a party hosted by The Donald… Iverson and CWebb skip fan appreciation night… The SLAMMY’s winners include Danny Fortson winning the Charles Oakley lifetime achievement award… The Playoffs begin. Jake is in Cleveland as a WITNESS… Ron Ron and Haslem each get suspended for a game early in round 1… I link to a blog called “Mutoni’s Musings” with a photo of Kareem in an interesting jacket… Running Down a Dream… Charlie Rosen calls Carmelo a choker… Kobe announces he’s changing to #24… Steve Nash is named MVP. Kobe dunks on him…

MAY
The first round of the playoffs is really effing good, highlighted by the game with Kobe hitting those shots and Smush stealing the ball… Raja Bell clotheslines… Reggie Evans gets caught with his hand in the cookie jar… Anthony Johnson scores 40 in a playoff game… Kobe scores 50 as the Lakers lose and Tim Thomas hits a monster 3… And then Kobe stops shooting in game 7, as we move on to the second round… The Nets blow out the Heat in game 1 in Miami… we couldn’t let go of talking about Kobe as much as possible… Lang says he went to a wedding a year ago where Taylor Hicks and the Soul Patrol were the band… Our office softball team played the greatest game of all-time, winning in dramatic fashion. On my birthday! My high school baseball coach was there for some reason… The rumor of a Larry Brown buyout and Isiah becoming coach builds steam, but its too preposterous to believe… The Nets don’t capitalize on their 1-0 lead… We were really ALL OVER the playoffs last year. Seriously. In the midst of the blog revolution, we did us… Lang and I go to a Yankees game, which started with the Yanks down 8-0 and ended with a Jorge Posada walk-off homer that we missed. Oh, and Lang caught a foul ball rocket off A-Rod’s bat… We ponder how it’s possible for KITT to be able to drive up into a truck and stop cold while going 70 MPH… The Pistons beat the Cavs and the Mavs beat the Spurs in game 7s… The Wages of Wins comes out. BS AI hating… The draft lottery… Mike James on SLAM Radio… I start namedropping NBA blogs without mercy… The Pistons start cracking and Miami starts to look like a unified team… Julia Stiles is photographed in a Mets shirt. Love is in the air… And so are amazing photos of drunk and dancing Steve Nash… Such a crazy playoffs…

JUNE
Ben Wallace stuffs a Shaq shot cold. It’s supposed to be one of those “changing of the guard” type moments… Gilbert Arenas gets arrested on Miami beach for getting out of a limo. He starts to quote Ron Burgundy… Lang takes off for a pre-Finals vacation that will merge into being on the road during the Finals for roughly a solid month… Lang reads Braves architect John Schureholtz’s book and blames the Braves non-playoff season to come on the book… Dirk scores 50 against the Suns… God of War took over my life. I started seeing the NBA in terms of greek mythology… Lang goes to the Miami clincher against the Pistons, and it’s a party in Miami… Lang hints at big changes coming to slamonline… We run the cover of SLAM 100… Mark Cuban starts furiously blogging away claiming the underdog card… youtube mania on our site. Videos for the sake of having video. It’s a great time… I secure an exclusive interview for the site with selltheknicks.com… Newly signed Cowboy Terrell Owens shows up at the Finals in Dallas wearing a Shaq Miami jersey. I hate him…

At this point, the archives start messing up. But that is the first half of the year, all from The Links. Hope you enjoyed the trip down memory lane. Read it on New Years Eve.