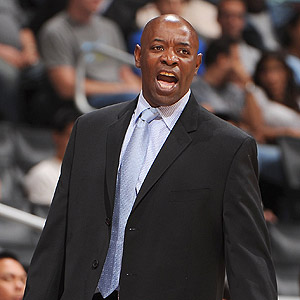 It was the kind of tirade that can easily put a crimp in the relationship between a coach and his highest-paid player. Luckily, Warriors coach Keith Smart asked permission in advance.

During Friday night’s win over Utah, Smart thought a Jazz layup was caused by David Lee missing a defensive assignment. By the time the referees motioned to the scorer’s table for a Warriors timeout, Smart was already halfway onto the court walking towards Lee, red-faced and yelling at him.

Lee took exception, saying he had been fouled, before assistant coach Stephen Silas stepped in front of him. Which only made Smart’s eruption more volcanic. It lasted the entire timeout, and Lee skulked away with his chin somewhere near the Warriors logo on his chest.

The issue didn’t seem to last long. Smart visibly praised Lee during a second-half timeout, and after the game Lee and Smart said all was well between them. Launching the Warriors to a 4-1 start for the first time since the Harding administration (roughly speaking) probably helped, too.

But that wasn’t all. In a surprising turn during his post-game press conference, Smart mentioned that he’d previously asked the team permission to correct their mistakes. Yes, asked their permission. Smart may preach old-school discipline like his college coach, Bob Knight, but he’s also influenced by the pop-psychology motivational tactics of coaches like Pat Riley and Phil Jackson.

“We have a covenant agreement with each other that at times when you’re not doing what you need, I’m going to let you know,” Smart said. “But also know that I don’t hang onto anything. It’s over. He (Lee) was supposed to do something, he didn’t do it, and that was it. It was over. They know it’s not personal. They know it won’t linger.”

And how was this covenant sealed?

In the preseason, each player shook hands with Smart to confirm it. And before the Warriors’ game against the ever-disciplined Jazz, Smart conveniently asked his players for a renewal, and they all shook hands again.

His players have bought in, lock, stock, and fully loaded handshake.

After a game that Monta Ellis said the old Warriors would have let slip away — a low-scoring slog decided by rebounding and half-court execution — Lee confirmed Smart’s description of the agreement.

“Coach has been tough on us from the day he took over,” Lee said. “But it’s not about his ego. He never says anything for his own pleasure. He does it to make us better. He’s honest and always tells it straight and that’s all you can ask for out of a coach.

“Today he said we needed to keep doing what we’ve been doing and wanted to keep us up on it (the covenant) and each one of us shook his hand … we reaffirmed our vows.”

The covenant was also visited upon longtime Warriors center Andris Biedrins, who was benched in the third quarter for a defensive miscue. Afterwards, the usually stoic Biedrins discussed the benching with emotion— he actually seemed to like it.

“I made just one mistake and he took me off (the court) right away,” he mentioned, unprompted, when discussing the team’s newfound discipline. “Just for two minutes, just to think about it, then he got me back into the game. That’s what we have to do. We have to work hard as a team, and that’s what we’re doing.”

Those who have gotten to know Smart over the years as a genteel assistant coach can easily imagine him engaged in a successful group psychology exercise like the team’s covenant, but until recently would have had a tough time picturing him lighting into one of his players the way he did Lee. Gradually, his rough edges are starting to show, on and off the court.

After the third time being asked about the Lee incident in the post-game presser, Smart offered a short, tart response that Knight would have loved.

“We had a disagreement, we came back together, and now we’re going to go get ice cream.”

Everyone was so surprised, nobody thought to ask Smart if he was planning to make a covenant with the team’s beat writers, too.

Game Notes
— Smart started training camp by giving his players a complex set of out of bounds and special situation plays that Knight would have appreciated. But just a few games into the regular season, Smart thought his players were overwhelmed by the Xs and Os. So he threw the bulk of it out, instead relying mostly on simplified plays he develops on the fly during timeouts.

“We’re making hard cuts every single time instead of being robots running the same set plays,” said starting forward Dorell Wright. “Guys can scout that. When we switch it up every time it’s hard to defend.”

The Jazz would have to agree —the Warriors’ repeated quick scores out of timeouts and stoppages were a big factor in Friday night’s game.

— Utah GM Kevin O’Connor told SLAMonline that the team does not have a succession plan for Jerry Sloan, whose lead assistant (Phil D. Johnson) is also nearing retirement age.

“I think if you look at the last couple years, Jerry was at his best coaching,” O’Connor said.  “You always prepare for things, but right now we don’t see an end of the line. Right now we see some train rails going down and him staying for a long time.”

— Veteran Warriors guard Charlie Bell cautioned teammates and fans alike not to get too excited over the team’s 4-1 start, which included four straight home wins: “We just did what we’re supposed to do,” he said. “Now we have to win games on the road.”