A quick word about the Next Great American Center 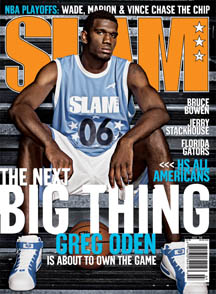 I think last night was the eighth draft I’d attended as a member of the media. And yet, before last night I’d only attended a single post-pick press conference (after the players rap with Stuart Scott and ESPN Radio, they are escorted through the halls of the Theater and brought to a traditional press conference setting where writers can ask them questions.) The only one I’d gone to was Ron Artest’s in 1999 (people sometimes act like his insanity came on late, but Ron was nuts back then, too and I was eager to see what he’d say about getting dissed by the Knicks).

Last night I attended my second post-pick press conference. Sitting in the stands, watching Greg Oden prepare to get chosen, watching David Stern walk to the podium and say, “with the first pick of the 2007 NBA Draft, the Portland Trail Blazers select…Greg Oden” (a phrase I had predicted exactly except for the team name, in print and online, at least 20 times since Oden was forced to skip the ’06 Draft), watching Oden come to the stage…it all made me feel old, as well as very impressed with Oden. I thought about how I started taking notes about Greg after hearing him referred to as “the Next Great American Center” when he was in ninth grade. I thought about Ryan’s SLAM feature on Greg and the other big men in the HS Class of ’06 when those guys had just finished their sophomore years. I thought about how at that point Greg was projected to be the top pick in the ’06 Draft, and how some GMs said they’d take him No. 1 if he’d turned pro as a high school junior. I thought about how the second the NBA made it impossible to turn pro Greg instantly became the projected No. 1 in ’07. I thought about what a great interview he was when I spoke to him for the cover story you see here.

So, you say, what’s the big deal? Everything happened the way it was supposed to. Well, to me, that’s a big deal. Greg Oden could’ve been sidetracked by any number of things, from bad decisions to bad luck to bad people (or any combination of the three), and he came through all of it to become the No. 1 pick.

This history was plenty reason enough to follow the big man through the hallway and into his press conference. He conducted an interview on a cell phone with a Portland radio station for his walk through the theater, still slapping as many fans’ hands as possible, and kept right on doing the interview until he sat before the assembled media at the press conference. His mic on, he finally cut off the radio interview by saying into the phone, “I’m sorry, but I’ve got to do a press conference.”

He proceeded to charm everyone in the room with his witty answers (such as telling David Aldridge he won’t get in trouble in Portland because his “bedtime is 1:30”), ending the press conference only when the NBA made him. Obviously the riches and fame will increase, but every indication is that GO is staying the same way he’s been since he appeared on our radars in 2003: driven, humble and thinking about his next challenge. The next thing that is “supposed to happen” is that this great big man becomes a NBA superstar and wins a title (or three). As I said in an interview with the Starting 5 Blog I did yesterday, I say he will accomplish those things as well.