A sister’s point of view 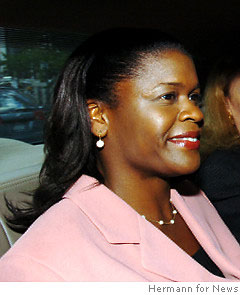 Yesterday’s Isiah debate on the site was spirited and relatively intelligent, but more than a few commenter’s wanted a woman’s perspective. Adrienne Goodson is here to help you.

I got tired of the male point of view so here’s the meat and potatoes from the female side of things. This email came from a friend over at the Women’s Sports Foundation in Hempstead, NY on Tuesday morning. She will remain anonymous, but I must say that it was a good look my sister.

Just so you know, Anucha has been very strong, respectable, and well composed throughout this trial. They have been trying very hard to dig up anything that would discredit her in the eyes of the jury, but her word is solid. These days in court have been painfully long and tedious but Anucha, so far, has been able to convince everyone that her work environment had been incredibly hostile and that MSG retaliated against her when she filed a formal complaint. I must admit that some of the defense’s questions are annoying because of the repetitiveness and minutia, but Anucha has remained pleasant throughout and sometimes she throws in a little bit of humor which causes the entire courtroom to burst into laughter. I know that this trial is weighing on her and she continues to say that hearing from her friends or seeing us in court is very uplifting. Last week I saw a few Atom alumni and it was a nice feeling to see Anucha’s response. Yesterday she had a few old friends from IBM (men and women) who came to support her. I know that she will get through this and I hope this sends a strong message to America; that the social acceptance of sexual harassment and the use of derogatory words towards women in the workplace is unacceptable. Here is a link from the news 7online website which shows the clip from the video taped deposition of Isaiah Thomas:

The Garden claims she was dismissed for a failure to “fulfill professional responsibilities.” After the last season in New York I would say he may also fall under this category. I have always loved Isaiah for his talent on the court but, he has always had a quick mouth. I wonder how he would feel if somebody spoke to his wife like that, but then again maybe that’s what this is all about.”

Well put letter, I’d say. I’d also like to add that Anucha was a great player in college at Northwestern. I mean, awesome. Stay tuned, Hoop Reality is in your area…