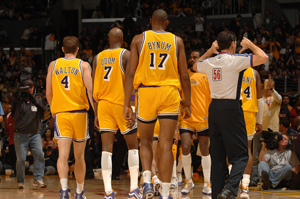 Missing a large chunk of any season because of an injury is never a good look. Missing more than half of a season in which your team made it all the way to the finals just flat out “sucks.” The case of Andrew Bynum, the Laker big man who missed 47 games over a knee injury last season, was made more disheartening by the fact that the 7-footer

began making the serious strides scouts thought he would.

SLAM recently caught up with Bynum, who was in Cali preparing for the start of training camp.

SLAM: So tell me, what was your off-season like?
Andrew Bynum: The off-season was pretty cool. We actually did a lot of things. We started with the track every morning, then we went to weights, then we went to basketball. We did that for about a month and a half straight down in Atlanta. And before that, obviously, I was in rehab in New York City with a guy named Bob Panerello, who does great work. And, you know, I’ve just really been trying to get my knee right.

SLAM: Do you feel you’re going to be 100 percent to start the season?
AB: Yes. I’m going to be, probably, 110 percent, cause we’ve just been working hard. I can jump an inch higher than before. It feels great, actually. I think it might even be stronger than before the surgery cause we were actually able to focus strengthening the leg, which is something I’ve never really done before. So, the surgery went well, and I think I’m 100 percent.

SLAM: What kind of things have you been doing to get your knee stronger?
AB: Well, we started out with a lot of ice. And isometric contractions which are just basic contractions of the muscle and then we were able to go to partial squats and one legged partial squats and, as it got stronger, we started to add a little bit of lateral movement in, some hops, some agility drills. After that, we progressed into full-blown squats, jogging, and we went to running. Once I was able to run, that’s when I felt comfortable with the situation in my leg and, you know, just kept building from there.

SLAM: What skills have you been working on away from getting your knee ready? Is there anything you can’t do?
AB:: I can do everything. Basically, this off-season I’ve been focusing on dribbling skills and developing a 15-20 foot shot, which should be able to free me up a bit more so I’ll be able to face up against defenders and be able to make moves against them. cause it kind of got to a point where people were trying to take the middle away from me. So now if I open up, and I see that they’re sagging off, I can pop a little J and they’ll have to play me honestly. And it’s just easier.

SLAM: Was it hard for you to see your teammates advance in the Playoffs without you?
AB: Nah, not necessarily. I knew we were gonna be a good team. When I got hurt, we were number one in the West and then obviously by picking up Pau we were able to keep doing what we needed to do. So, I wasn’t surprised by the fact that we made it as far as we did. But I was surprised by, more than anything, how we lost. That was a shocker to me.

SLAM: What do you feel like were the deciding factors in you guys not getting past the Celtics?
AB: The deciding factor, obviously, was team defense. We had none. We had a guy, at one point, drive coast-to-coast and dunk the ball with no one touching him. Right down the middle of the court.

SLAM: Do you think the outcome of the Finals would have changed, had you gotten a chance to play?
AB: I hear that all the time, but I think that with myself in there, we would have been stronger defensively, but I was in there the first two games. I just don’t know. I

definitely know that this year I’m much more confident, I’m stronger than I was and I’m definitely going to be ready this year to play anybody and everybody who’s out there.

SLAM: Vegas has the Lakers picked to win the whole thing. Is that scary for you?
AB: Nah, that’s not scary. It’s the respect that we’ve been given. And now the thing for us to do is go out there and show that we deserve that respect. It’s not scary in the least.

SLAM: Some people think once you return that the Lakers have no excuse not to win the title. Do you feel that at all? Is there any pressure?
AB: We’re expected to win it. I expect nothing less from us as a team. We’ve been together now for three years—everybody should pretty much know the triangle, know everybody’s strengths and weaknesses, and we just gotta be there for one another. That’s the only thing that we haven’t done in the past, and I think that will change this year.

SLAM: How does that make you feel, knowing that a few years ago you were in high school, and now people are putting a lot of weight on your shoulders to win the championship and to be a big part of the Lakers’ success?
AB: It makes me feel great, actually. To know that the trainers, they’re expecting things from me and they’re behind me. That’s what I do everyday: go out and work hard and just try to be ready for it. It’s a great difference between high school and now. Cause you have a franchise that’s waiting for you to be the star that they hope, and I just think that if I go out there and handle my business on the court and play hard everyday then I think everything will work itself out.

SLAM: What is the biggest benefit of playing with Kobe Bryant?
AB: The biggest benefit of playing with Kobe would be that every single game the defensive is 100% geared up towards stopping him. So, you can get a lot of garbage points and definitely there are open spots for easy dunks and things like that. And now, with the acquisition of Pau Gasol, I just think that is even better for everybody else on our team. Cause now it’s like, if you double Kobe, now you got a definite mismatch, cause who’s gonna guard Pau? Or myself, for that matter? I think on the offensive end we’ll be fine. We were able to score a bunch of points last year, and I don’t think that was the problem, the problem was on the defensive end.

SLAM: Have you gotten a chance to play with Pau at any point during the offseason?
AB: I haven’t had a chance to play with Pau, actually. It’s gonna be my first time this upcoming training camp. I get asked this question a lot, and I think it’s gonna work great, because on the offensive end, if one of our men has to help the other big, whether I be five and he four I’m four and he’s five, if one of us catches the ball on the block, automatically the other big is gonna be looking over there to help, so that gives a great opportunity to offensively rebound the basketball. And also, due to the fact that we’re both seven feet and have long arms, I think we’ll be able to pass to each other. I think he’s a good passer; I’m an alright passer. So, I think it’ll work good on the offensive end. On defense, we got kind of a twin tower effect, where we can come into the lane and somebody can try to get past him they already have to alter their shot and I can be there to block it, or vice versa. I think it’ll work great.

SLAM: What do you feel like the strongest part of your game is right now?
AB: I think the strongest part is probably sprinting down the court early and getting deep post position. I think if I get deep post position, there’s really nothing anybody can do. I can finish right, left, and just have a variety of different moves I make thanks to Brian Shaw, Gerald Wilkins, and Kareem Abdul-Jabbar, also Kurt Rambis, just teaching me every day, working out.

SLAM: Have the veterans been playing pick up ball or anything like that?
AB: Yeah we started playing pick up ball shortly after I got back; I got back September 2, so we’ve been running. The true veterans aren’t really yet—you know, Pau, Kobe, Lamar. They’re working hard individually, doing those types of things. They all played a tremendous amount of minutes. I wanna say yeah, the mid-veterans and young players are all playing pick up.

SLAM: Who on the Lakers do you feel like you look to the most for advice?
AB: Actually, Kareem, cause he’s the greatest center to play the game. He’s more of a mentor for me. He actually comes over to the house to break down notes that he has taken on me during the games—what I can do better, things I’m doing pretty well. I think that’s the biggest help for me.

He teaches me about footwork a lot of the time. I have a really bad habit of going to a side of the basket where I’m supposed to use my left hand and trying to shoot it with my right hand. So, he just constantly reminds me, “shoot it with the left, it’s wide open and an easier shot.” As far as defense goes, trying to get there before plays happen; don’t come late; get your body out of the way of an attacking guard so you don’t pick up fouls. Just little tidbits and things like that, he just constantly is there reminding me and I think that’s a big help.

SLAM: Do you ever ask yourself “I didn’t play much with these guys last season. Am I gonna come in and cause any confusion?”
AB: I really doubt that, cause I don’t think the triangle really allows that. Everybody has an assignment within the triangle. So whether you just get plugged in or not, you just have to fill those actions, so I don’t think I’ll have any problem fitting back in where I did last year.

SLAM: The Lakers are doing this “preseason caravan” this year where they plan to play in a bunch of cities in Cali. Are you excited to see more of the state?
AB: It’s one of the more spread out preseason’s. We have a bunch of games to play in a bunch of cities and I just hope we can win ‘em all and make everybody around us happy. Yeah, I’ve been to Anaheim, but I don’t think I’ve ever been to Fresno. I’ve been to Disney. Vegas, I’ve been there a couple of times. I don’t really go for the casinos or anything like that, but it is a pretty cool place to visit. You can go see the shows. This actually is my first time in San Diego. We’re driving down right now. I don’t know what to expect, but I hear it’s a very beautiful place.

SLAM: What match up are you looking most forward to next season?
AB: I gotta say I wanna play the Celtics, because I’ve had two of my worst games playing them, so I wanna get back and get and opportunity again.