Aaron Gordon: One Time 4 Your Mind

Magic forward Aaron Gordon entered the NBA as a slam dunk machine. Now in his fourth season, AG has matured off the court and evolved into an all-around threat on the verge of stardom and a massive contract. 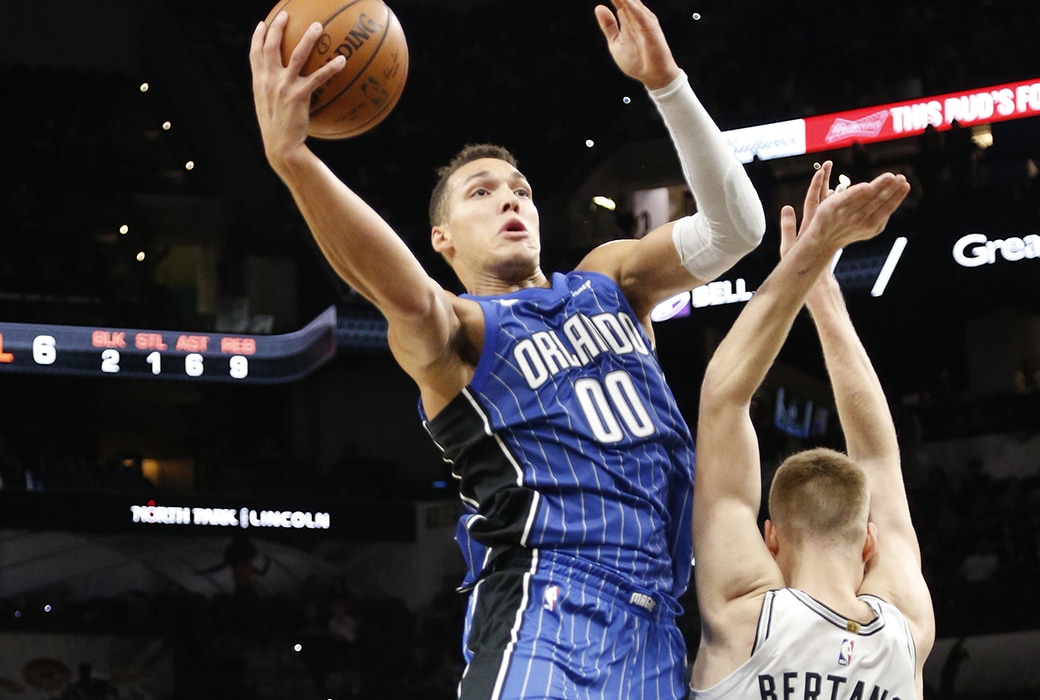 After a mid-October shootaround at the NBPA headquarters in Manhattan, Aaron Gordon takes a trip down memory lane while looking at his younger self in the pages of SLAM. Leading the PUNKS section of SLAM 165, a 17-year-old Gordon stared wide-eyed into the lens. His senior season at Archbishop Mitty (CA) was about to commence.

“That’s the difference between me [now] and that Aaron back there,” he says. “I was really impatient with myself. I wanted to be so perfect all the time.”

AG was hardly an unknown player back then. A consensus top-5 prospect, Gordon had practically every college vying for his commitment. Before he ever stepped foot in Tucson, he was already a projected lottery pick in NBA mock drafts. And before he was in SLAM, Gordon’s highlight mixtape had already gone viral on YouTube. His reel of thunderous jams fueled his rep as a dunker. It’s a perception that AG says he inadvertently helped create.

“I think every high school kid these days wants a mixtape,” he explains. “When you saw the camera, you were going to make sure you showed out so you could have a sick mixtape at the end of the year.”

To this day, Gordon’s highlights—usually of the earth-shattering, monster jam variety—fail to do him justice as a complete player. “There’s tons of aspects of my game that get overlooked because the highlights are so high,” he says.

Patience. Gordon tapes a bag of ice over his sore ankle. Mindfulness.

“It’s definitely go-time,” says Gordon, as he takes care of his sore ankle, “but at the same time, you got to continue to be mindful.”

After an impressive (and healthy) preseason, Gordon came down awkwardly on Heat center Hassan Whiteside’s foot in Orlando’s season-opener two nights ago. Just when AG was ready to run out of the gate, the Basketball Gods had other plans.

“Meh,” Gordon says with a smile. “We’ll see once it gets closer to game time.”

“That was the big thing [this summer],” AG says. “I’ve always been so impatient with myself. I just worked on patience.”

It’s this maturity, this hyper self-awareness, that made Gordon’s breakout potential so great this season. He’s on the short list of everyone’s Most Improved candidates. As Gordon told NBA.com during the preseason, “There’s still no ceiling for me.”

His numbers so far have backed it up, averaging 17.4 points on 50.4 percent shooting and 43 percent from three in 32.3 mpg as we went to press. The shooting numbers were by far the most encouraging. A career 29 percent three-point shooter before this season, AG knows improving his jumper will make the rest of his game easier.

So who’s Aaron Gordon the player? It’s perplexed fans since he entered the L. Defensively, he has some of Draymond Green’s versatility, anticipation and ability to guard any position; physically, he resembles a young Shawn Marion. Offensively, AG entered the League very raw, but he’s shown great progress. Clearly confident in his abilities, he told NBA.com before the season, “I’m looking to be the best in the NBA at some point in my career.”

Whether Gordon will become the best in the NBA remains to be seen. But it’s more likely—dare we say a solid bet—he becomes the best damn X-factor in the League.

Gordon has always had the tools of a modern defensive juggernaut: a player with a 7-foot wingspan, elite motor and athleticism. He’s one of only a handful of players versatile enough to guard every position—from James Harden to Boogie Cousins.

Offensively, his game is far more diverse than his rim-rattling highlights give him credit for. He’s always excelled in transition and on offensive putbacks. But here’s what doesn’t show up on your Twitter feed…

AG can bully smaller defenders in the post, blow by bigger defenders off the dribble, pull-up from midrange and spot-up from three. Admittedly a work in progress, he spent his summer and training camp perfecting his offensive imperfections.

Which, of course, takes us back to Gordon’s mental training.

“If you stay in the present moment with you and I right now, everything is good.”

No, AG didn’t have an epiphany over the offseason about the importance of mental training. He has long committed to staying in the present moment.

Thankfully, getting back on track is not complicated. “You breathe. That’s the biggest thing. Taking deep breaths,” he says. “That’s the best way to get yourself back to present. If you start thinking about who you were then, you’re never going to get better. If you think about where you want to go, you’re never actually going to get there.”

While the present is Aaron Gordon’s focus, his past can show us his biggest attribute: leadership.

“AG taught me how to play hard,” says Pistons forward Stanley Johnson, who came up with Gordon in the Oakland Soldiers AAU program. “I really didn’t play hard, I was more talented than everybody. AG was probably the first person who was just as athletic and talented.

“Then we went to Peach Jam and I put it together,” Johnson continues. “He was like, ‘Just score, just score, just score.’ He was trying to be the No. 1 player in the country—so for him to give me the ball versus, like, Andrew Wiggins, I was taken aback.”

Wiggins became the consensus No. 1 player in the Class of 2013, but AG was always in the conversation. Gordon committed to Arizona, not necessarily to be featured within the system, but to become the team’s X-factor needed to win a championship. “I’m here to do whatever it takes to win,” Gordon told Sports360AZ during his freshman season. “I’m not trying to impress anybody. I’m just here to show my team that we’re here to win.”

And win they did. The Wildcats went 33-5 on the year, and while they lost a heartbreaker in overtime to Wisconsin in the Elite Eight, Gordon showed enough to be taken fourth overall in the 2014 Draft.

Consequently, in Gordon’s three full seasons with the Magic so far, Orlando has surpassed his college total of 33 wins just once (35 games in ’15-16). He’s had four coaches in as many seasons, and he could sign elsewhere as a restricted free agent in 2018. But he’ll cross that bridge once he gets there.

“He’s gonna be a max-guy, a 20-year pro,” Johnson says. “His mentality, what he has going for himself, he’s on another level.”

And when a defender stands between him and the basket, rest assured, he’s still going to try to dunk it hard on him.