The highly touted prospect from the University of Arizona talks family, team workouts. 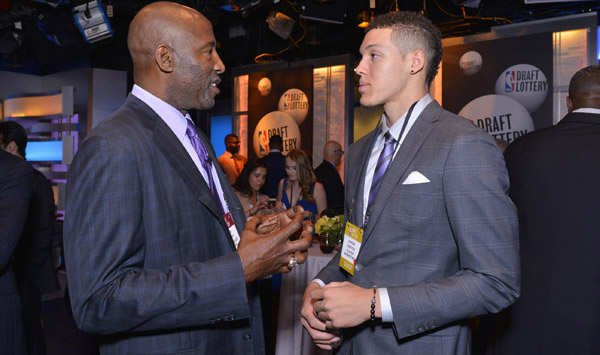 Since his collegiate career ended in April, after the University of Arizona Wildcats lost in the Elite Eight and he declared for the NBA Draft, freshman phenom Aaron Gordon has been in the lab. The nearly 6-8 forward took up residence in Southern California, where he’s been working out religiously. More recently, he traveled to Chicago, IL, for the NBA Draft Combine, and to Manhattan, NY, for the Draft lottery drawing. Gordon, the athletic younger brother of former high school star Drew Gordon, made a positive impression at both events. Barring something major, he’s expected to go in the lottery portion of the Draft.

With less than a month left until the Draft, which is being held in Brooklyn, NY, the affable Gordon has agreed to keep a weekly diary with SLAMonline. In the second entry—catch the first diary entry here—Gordon, who averaged 12.4 ppg and 8 rpg at Arizona, details his experience at his sister’s college graduation, his first open workout and more.

by Aaron Gordon (as told to Tzvi Twersky)

First off, I didn’t mention this last time, but I have a brother and a sister. My oldest brother, Drew, is professional basketball player. And my older sister, Elise, just finished up at Harvard. We must have good genes, right?!

Actually, I was just out in Boston last week at my sister’s graduation from Harvard. She got accepted to Harvard more than four years ago, and she just hit the ground running. Commencement was emotional for her, and I’m just extremely proud. It reflects well on our whole family.

To be honest, she’s going to by my manager and go wherever I go. To have your sister, with a Harvard degree, managing you is just an unfair advantage. It’s unfair. But if I can get an advantage like that, I’ll take that!

Before all that, I was in New York for the lottery. It was so exciting to see where the ping pong balls dropped. Not only just to see where my peers would be going, but where I could be going too. Like, Orlando has four; Boston is six; Sacramento is at eight. I think it’s a pretty good drawing for me.

My next stop is Sacramento. I’m headed out there for a workout with the Kings. The next week and a half, really, is a grind. I’ve got the Kings; then I go to L.A. for the Lakers; then I go to Boston; then I think I go to Orlando after that.

My first open workout was the one my agency, BDA, hosted before Memorial Day. I’m sure you know, since SLAM posted the video from it. I was a little nervous at first. Then I started making shots, my nerves were gone, and I was just playing basketball. Even though there were more than a 100 NBA scouts sitting there seeing if they want you or not, it was still fun basketball. One thing is, I wish I could’ve worked out for longer. It was only like 45 minutes, and I was ready to go for an hour and a half.

Now, Sacramento is my first team workout. I think it’s going to be a little more relaxed. I’m just going to meet with a few people, get a few shots up and have a relaxed workout. They have the eighth pick and that’s kind’ve my range, so I want to see what they’re talking about.

L.A. is the next stop. That should be fun. The Lakers are a great program. It’s a traditional program, so I think the level of intensity will be way up.

So far, this Draft grind has been nuts. I’ve been on so many flights. I’m on the East Coast, heading back West. Then I’ll be West, going back East. Then back West, and East for the Draft. I kind’ve like it, though. It’s all part of the training for the NBA. And as long as I find plenty of time to get in the gym, I’m always alright.

Catch you guys again next week.