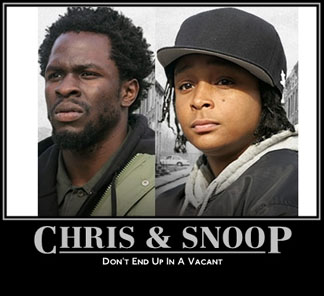 I have to be honest with you. If I were a beat writer I’d have killed myself by now. The only question is how I would have done it. Hanging from one of the doorknobs? Cooking up a couple of hot shots? Or maybe some poor soul would discover my tortured carcass sprawled across a press table, skull hollowed out by the horrors my eyes could no longer endure.

Okay, perhaps that’s a bit much. But this is still pretty f–king bad. I’m talking “Meet Patrice up at the playground…” bad. Damn, there I go again…

Anyone who knows me is more than familiar with my affinity for The Wire and has been subjected to at least ten minutes of my ranting and raving. The way this show has contextualized how America is losing-to drugs, poverty and bureaucratic indifference-is beyond fascinating. It’s true. Too many crime dramas have become parodies of themselves, dripping with simplistic stereotypes. These hackneyed depictions render a dying people and their plight to mere props for law enforcement, portrayed by well coiffed young men and women who’ll deliver you a conviction in 45 minutes or less. It’s bulls–t. David Simon knows this, and has broken the mold with not only a resolute narrative of modern crime, but also it’s broadened landscape and enablers. On Sunday nights, Americans tune in to see the parallels of crumbling institutions-our police, our schools, the drug trade on our corners-and the victims who fall through their cracks. The Wire successfully explains to us why swift and satisfactory justice is a rarity in this world, delivered solely to those who live in the right zip code. Which is one of many problems for the Minnesota Timberwolves.

Isiah Thomas made us all laugh last week with his championship aspirations, but his statements weren’t completely ridiculous. If he were fired today, despite the lingering reminders of his bad decisions, the Knicks could be on their way to a championship in just a couple of years, if only because of location. They’re still in New York, the country’s biggest market and the games’ Mecca, a serious enticement for a superstar such as Kobe or LeBron. Knowing that they’re one of the leagues premier teams is a reason for the woeful outcries of the Knicks faithful, but also a source of encouragement for their future. They can’t stay this bad forever. Right?

Meanwhile, it’s been damn near impossible to properly contextualize just how bad the losses are in the Target Center, but leave it to resident genius Britt Robson to adroitly summarize the current state of affairs. “This is a team without a strength.” Indeed. At 4-29, the Timberwolves face a daunting January schedule and have plummeted past even the lowest of preseason expectations as they raise questions of historical ineptitude. Is this the worst team ever? I don’t think so, but that’s little consolation for what’s definitely the worst team in the league today. And I say that with as much reverence as one can muster for such a damning statement. This is a group of generally hard working and respectable players. I’ve seen them practicing to improve their perceived flaws before games and I’ve seen their humility after an upset victory. This team wants to win and should definitely have more than four so far. Their collective talent and will kept them competitive with some of the leagues elite early in the season, however they continually succumbed to fourth quarter pressures that fans hoped were learning experiences for a young crew. After a stunning win over Phoenix and overcoming a 20 point deficit against Indiana in December, it appeared that the team had indeed learned something. But so had the opposition.

LeBron James referred to contests with this lowly franchise as “trap games”, and recent opponents have been sure not find themselves ensnared in one. Following their last win against the Pacers, the Wolves have been mired in a nine game losing streak, averaging 15 points per defeat. Excluding their victories against Sacramento and New Orleans, they’re losing by 16 a game against teams they’ve already faced this season. The lesson from the aforementioned learning experiences apparently was that teams simply weren’t giving their best effort and the potential revealed in those close games has been cloaked with doubt ever since. As a team with practically no experience and marginal talent, the Wolves must know that every game requires their best effort. And even when that is given, it only encourages the next team to dispose of them quickly to send a clear message that even Minnesota’s best effort isn’t good enough. Any modicum of hope is to be sought out and killed. There are no more moral victories.

However what’s particularly frustrating is that Minnesota has little, if any, recourse. Usually a franchise steeped in such futility makes a drastic move to shake things up. But what would that be? Get rid of the coach? That would be the third midseason firing in the last four years, and they’re still paying the last coach’s salary. Besides, as maligned as Randy Wittman is, the fact of the matter is that his bad decisions only compound the problem of this team being ill equipped to compete in the Western Conference. So no, Wittman shouldn’t be playing Jefferson at center or Corey Brewer at the two and he probably should be making a more concerted effort to find rotations that allow these neophytes time to develop. But even if those changes are made, how much better would this team be? Would they have twice as many wins? Big difference. So maybe they should make a trade? The only bait they have to offer is injured center Theo Ratliff’s expiring $11 million contract and they’d rather free up some cash. But for whom, you might ask? There has only been one great player in the history of this franchise and he left after management failed to surround him with complementary talent. Who honestly wants to come here to compete as he did and isn’t just looking for a big payday? It would seem safe to assume that players will go wherever they see an opportunity to win, but the only thing this team is in a position to win is the draft lottery. And those ping pong balls aren’t all they’re cracked up to be either. Just ask Boston.

So the only thing the Wolves can do right now is wait. Wait and see if Randy Foye’s return-if it happens-can open up the floor for his lesser talented teammates and take them out of the stagnant half court game they’ve been dragging through. See if Al Jefferson’s savvy can translate to the defensive end of the court like his role models, Hakeem Olajuwon and Tim Duncan. See if this team has the “fight” that their coach frequently refers to. Even if they’re unsure of what they’re fighting for.