If new NBA commissioner Adam Silver wants to distinguish himself from predecessor David Stern, he needs to stand down from his proposed "two-and-done" rule change. 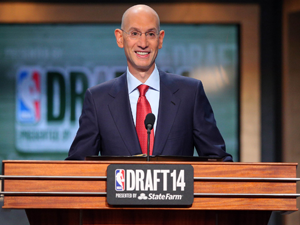 When Larry Bird was a rookie, he was 23 years old. In the 2014 Draft, we didn’t see a 22-year-old until pick number 11, where the Denver Nuggets snatched up Creighton’s Doug McDermott and subsequently traded him to Chicago. Before McDermott, the coach’s kid who played four years, we saw a motley crew of sushi raw 18 and 19-year-old prospects. The greybeard in the top group was Marcus Smart who, after staying for his sophomore year at Oklahoma State—in a decision that backfired—is all of 20.

This is nothing new. One-and-done is both the law of the land for top prospects and, misguidedly, the No. 1 target of new NBA commish Adam Silver. Silver has called one-and-done reality for top prospects “a disaster,” saying that he wanted a rule requiring two years of college for anyone entering the League. He said, “We believe the additional year of maturity would be meaningful” and “I never quite understood the player opposition [to this kind of change].”

If reasons for opposition are not clear, I hope Commissioner Silver allows me to elucidate. In the NBA, you don’t get truly paid in your rookie deal. You get paid off of your second contract. The thinking among players and agents is that the sooner you get to your second contract, the greater amount you will make over the course of your career and the greater number of times you will be able to enter free agency before your skills decline. But this is only one reason why college players choose to go one and done.

It seems to be a fact of scouting and media groupthink, that the longer you stay in college, the greater opportunity for those judging you to dissect your game and in turn diminish your value. Conversely, if a GM drafts a raw player, his job is more secure because he can always say to ownership and fans that it takes time to develop.

But perhaps most critically, who really wants to work for two years without getting paid? Once we have dispensed with the niceties, that is really what Adam Silver is asking of the next generation of players. He is asking them to earn coaches and administrators millions of dollars while they ply their trade for nothing. He is asking them to sign autographs, sell uniforms and see nothing for it except the potential for the ugliest possible public embarrassment if they dare take any money under the table for their work. If he gets his way, Silver then also gets players who are already established brands by the time they enter the League.

This certainly makes sense from a business standpoint. The excitement over players with recognizable March Madness game creates expectations and a special kind of a buzz the likes of which the League hasn’t truly seen since Chris Webber was selected first in the 1993 Draft. It is understandable, but it isn’t right. It isn’t right because before they are products or brands, these are human beings with real families, real concerns and the real desire to get paid for being among the top one percent in the world at what they do.

Here is a suggestion for Adam Silver, which he can call the Dave Zirin Plan. High School players should be able to go pro. If they aren’t drafted, they should be able to enroll either in college or the D-League. Players who do go to college, get one year taken off of their rookie deal for every year that they remain in school. For example, if Jabari Parker had stayed at Duke through his junior year, his rookie deal as a first-round Draft pick would be only two years long. Players in college, just like those on the baseball team, should be allowed to have agents, advisors, lawyers, or whoever they like to help them navigate this terrain.

If the Dave Zirin Plan—although in the name of humility, Adam Silver can call it anything he likes—is implemented, I guarantee more players would stay longer in college, the exceptions being the Kevin Garnetts, the LeBrons, the Dwight Howards, those people whose physical gifts make their exclusion from earning a living an outrage. This is Adam Silver’s moment to not just be David Stern 2.0. It is his moment to show that if he is going to affect change, it won’t be on the players’ backs.