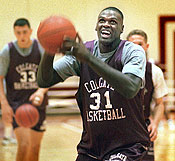 The second-longest tenured player (other than Kobe! Iverson and KG are such sell-outs.) in the NBA with any one team has been bought out, the great Adonal Foyle. You may think I am being sarcastic when I write that, but here is something you may not know about me; I attended Lafayette College, a Patriot League school, for the last year of the reign of Adonal at Colgate.

The story of the Patriot League does not need to be told here, but I recommend the John Feinstein book The Last Amateurs. Super abbreviated cliff notes version: unlike every other ridiculously corrupt Division I conference in the NCAA, Patriot League student athletes had to “go to class.” This was in the mid-late 90’s, before there were some rule changes and now it’s the same as everywhere else. Think of it this way, the conference was kind of like if the Ivy League had slightly better athletes and worse students.

Imagine if one day you dropped a potential NBA lottery pick into that mix. Your first reactions would be 1) Why is he here? Shouldn’t he be in a power conference? and 2) Ouch, every other school is… in trouble.

Adonal Foyle was expected to be dominant from day one, and he did not disappoint. Imagine if Dikembe Mutombo played against nothing but jump shooting centers and scrappy little guards. Games were always competitive, defense was ferocious, but the dunking was not so much. I have witnessed so many shots blocked by Adonal in humiliating fashion. Pinned against the backboard. Ripped out of people’s hands outright. Swatted out of the gym. On offense, he was big and he dunked on everyone, and that was enough. I can give you some numbers, but basically a double-double was guaranteed and the shot-blocking numbers were exorbitant to say the least.

The Patriot League has a sacrificial lamb automatic bid, which means the winner of the year-end Patriot League tournament goes on to face the #1 or #2 seed in the big tourney, and nobody else has any shot of getting in. You may have caught glimpses of Adonal Foyle in the NCAA tourney on TV a decade ago, when they would hype him up and say okay here’s the great and mysterious Adonal Foyle, let’s see what he can do against UCONN or UNC or someone like that. And Colgate would get blown out before halftime and he would have to return to dominate his lowly league. Which he would. Oh, how he would.

They say the measure of a truly dominant athlete is that he forces other teams to change their philosophy to try and compete with him. That is what happened in the Patriot League. Adonal already had one player of the year award, so ADs were desperate to find big men to throw at him. Lafayette came up with one named Stephen Ciosci (very similar name to our recently married art director now that I read it.), who was a great athlete for his size and at that level of play, but really his greatest gifts were that he was seven feet tall, and was from the same village in Romania as Gheorge Muresan. He was a good player who went on to win Conference Player of the Year once Adonal had moved on to the NBA. And yet, in the year they faced each other, he was totally dominated by Foyle head to head. It was ugly. And that was probably Adonal’s closest competition.

Today you can make your jokes about how Adonal got over on the system (MULLIN!) and made tens of millions to not play much, and I suppose every NBA player was the most dominant around somewhere along the line, and people have these kinds of memories of him at some point in his past. But I find the Foyle situation unique because he was with the same team that drafted him for a solid decade. It is very unusual for today’s pro athlete to stick around with the team that drafted him for so long. As far as Patriot League players in the NBA go, the list is for the most part: Bob Cousy, David Robinson, Adonal. I will choose to drift into glory days memories of when Lafayette finally earned a national TV appearance on ESPN2 late at night on a Saturday, at Colgate, simply because of the presence of Adonal.

He was a nice guy too!