Agent: Darko Is Ready for the Mike D’Antoni Experience 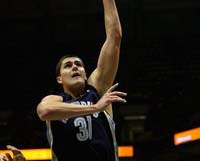 Over the weekend, Donnie Walsh confirmed that he has been in talks with the folks in Memphis about a possible swap involving Zach Randolph. In return, the Knicks would likely demand to get back a package that includes the stylings of one Darko Milicic.

Darko’s agent, who was in New York for the U.S. Open when the news broke, spoke enthusiastically of the possibility. From the NY Post:

“I think there’s a chance something might happen,” Milicic’s agent, Marc Cornstein said. “It’s up to the two teams. If he stays in Memphis, it’s a good situation for him.”

“But if he could come to New York, we’re big fans of Mike D’Antoni. He’s a phenomenal coach and [Milicic would] fit in very well with that system. Mike understands the European mentality.”

Yes, but does D’Antoni truly appreciate and understand the mentality of a spectacular bust?

It’s an especially enticing proposal for the Knicks, as Milicic comes off the books in a couple of years (whereas Jaric is owed about $10 million less than Randolph in 2010.)