AI and the Celtic Salvation 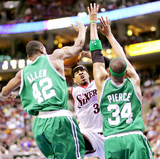 Something remarkably eerie happened Friday night before the Celtics-Suns game. One of those things that makes you turn your head and look twice to make sure that it’s actually happening.

A quarter-full Boston Garden — an arena overlooking a harrowed parquet floor that should sellout 41 nights a year by its legacy alone, but would still only be half-full by the end of the night — right before tipoff. They were rolling one of those schmaltzy “Pride of the Celtics” videos on the big screen.

And they were going to get to all of it. The 16 NBA Championships. The 25 Division Titles. Russell, Cousy, Havlicek. Bird, Cowens, Parrish, McHale. Even Pierce and Walker, by the end of it.

But they never got there. The tape, like a bad sci-fi movie, complete with that cliched sound of a reel screeching to a halt, froze on a black-and-white frame of Red Auerbach.

This was not on purpose. Well, not on the Celtics part, at least. The tech crew scrambled and the tape was rolling again (albeit a couple of decades later on the Celtics timeline) before some fans even noticed.

But this didn’t look like the work of anyone in the Celtics’ editing department in the first place. With a team so firmly entrenched in lore and mythology — the ghosts of Reggie Lewis and Lenny Bias still lingering underneath the parquet — it was impossible not to think:

Somewhere, somehow Red may have had something to do with this.

Maybe he looked down from above and saw that the Boston Celtics, the New York Knicks and the Philadelphia 76ers are all seven games under .500 and are perfectly fine with the situation. Maybe he saw that Celtics team that has been hiding under the guise of a “youth movement” for the last five years of his life and wondered if those youths are ever going to grow into the players he was promised they would be. Maybe he looked down and heard the questions directed towards Danny Ainge and Doc River asking them if they’d ever make a change, or stray from whatever plan they have, and heard them be persistently deflected.

Or maybe he heard that the savior of basketball in Boston is available, one man that would prevent the most historic franchise in the history of this sport from reaching borderline irrelevance, and the front office may be too unrelenting to even entertain the concept. And maybe he decided that he didn’t want to be associated with this anymore.

And could you blame him, anyway? On a night against the Suns where some of the best Celtics offense came from defensive three-second calls, you’d beg the front office to be a little more flexible with roster moves.

When Paul Pierce wasn’t on the floor in the first half, the offense worked around 3.0 point-per-game scorer Brian Scalabrine. Like him or not, find him embarrassing or not, even Brian Scalabrine will admit that Brian Scalabrine should not be the focus of an NBA offense at any time.

And even though Phoenix outran New Jersey in a once-in-a-lifetime, energy-draining, double-overtime 318-point track meet, boarded a plane to Logan Airport and only clipped the Celtics by four points 24 hours later, Doc Rivers sounded like this game was conceded even before the tip.

“That’s a great team in Phoenix,” he said after the loss. “They hit every tough shot down the stretch.

“We’re a young team. Phoenix gives you some good shots, but we have to be disciplined enough to give those up and get better shots.”

Well, why wait for the better shots? If Allen Iverson is this available, why not just fix the problem?

Sure, it might alter that undying “youth movement.” It might cost you two or three of those young guys to get it done. But if there’s no one around to watch Celtics basketball when, or if, this team ever grows up, will anyone care when those better shots start coming?

There’s a golden opportunity here. To bring in a future Hall-of-Famer to pair with an All-Star life-long Celtic, there’s not only a shot at the playoffs and the Finals, but also a chance to add on to that legendary, decades-long highlight reel. There’s an opportunity to bring people back into the Garden to stay. Boston will be a basketball town again.

Danny Ainge, when asked if he’d tried to call and get the Answer on Friday, delivered a quick, brusque “no comment” after visiting some old friends in the Phoenix locker room.

But if Ainge really wants to bring respect back to this team and to the area where it all started, he doesn’t have much time left before it dwindles away.

So pick up the phone, Danny, and don’t hang up until Red hits play again.