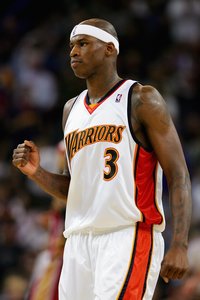 Across the board, Al Harrington’s numbers all virtually went down last season. Not only that, but Chris Webber even took his starting spot (for a little while at least). This, as you might imagine, did not sit well with Al, and he’s looking to be more of a contributor to the Warriors this year.

The Contra Costa Times has more:

“I feel like there are more parts to my game that can be used,” Harrington said. “(Coach Don Nelson) doesn’t put limitations on anybody, but when you are not in those positions, it’s frustrating. Without (Baron Davis) and Monta (Ellis), I feel like I have to step up and get more opportunities. That’s what I’m looking forward to, but only time will tell.”

According to Al’s coach, Don Nelson, Harrington has nothing to worry about. All he’s gotta do is cut down on the fatty foods, and he’ll see all of the minutes that he wants.

“The main thing with Al,” Nelson said, “Is that I need him to come in thin because I’m probably going to need him at more than one position this year. I think he’ll have a great year for us. He’ll probably play more minutes than he did before, so I need him to be in better shape.”

No point real point guard for a few months, a host of new players, and a pissed-off veteran. Sounds like a yet another fun season in the Bay.