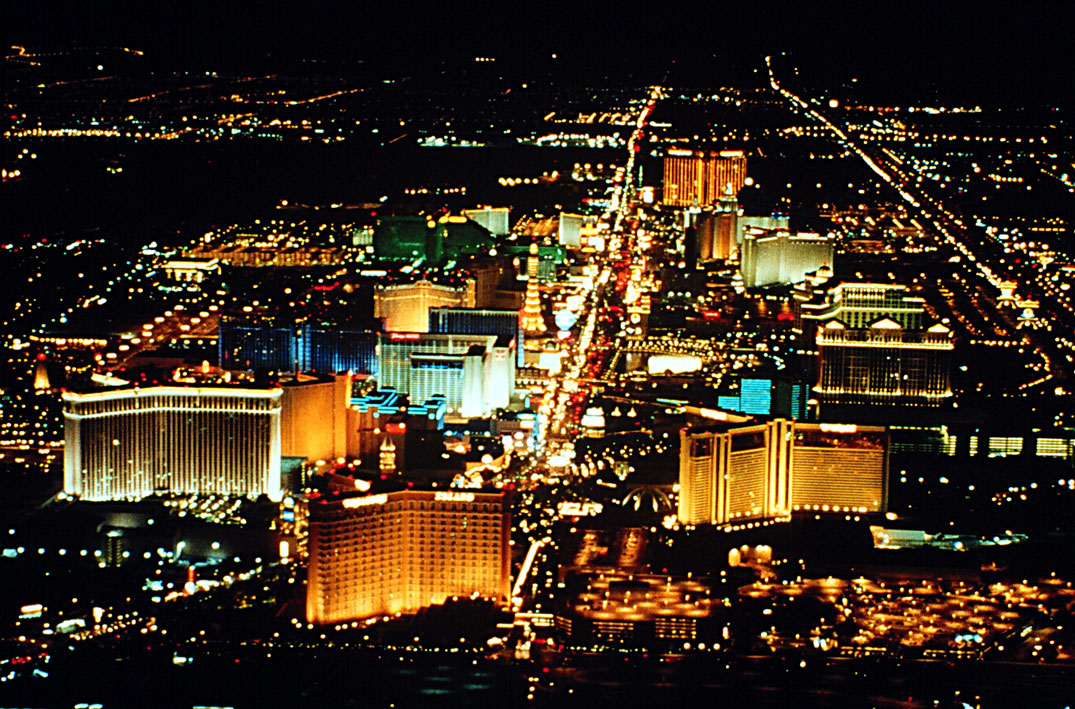 The alarm clock did not go off this morning at 5:00 a.m., probably because I did not set an alarm. After all, once the clock ticked past 3:00 a.m., I figured I might as well just stay awake until 5:00 and then sleep throughout the 6 hour flight to Vegas. But what I didn’t count on was that at about 3:30 a.m., I’d suddenly just fall asleep. Somehow I woke at about 5:05 a.m., and I had a car coming at 5:20, so I had to scramble into the shower, then pack, then run down to get in the car. And the best part was that we were about halfway to the airport in Newark before I realized that I’d forgotten to pack any shirts other than t-shirts. Oh well.

Got to Newark Airport and it was a complete disaster, with people lined up for miles and miles. People were lined up to fly on airlines I’d never heard of (USA 3000 Airlines?). Every person in the state of New Jersey was there, hoping to fly away from the dreary cold and ice. We quickly realized that the best way to get ticketed and our bags checked was by going through the curbside check-in. Problem there was was that it was 15 degrees outside and none of us were wearing coats. We made it, but I think Ben is still complaining about his feet being cold.

The flight was bumpy but uneventful. I slept most of the way. Sam and Khalid were intently watching The Guardian, and Khalid was cracking up at a replay of “Everybody Hates Chris.”

All of a sudden, we were in Vegas. Yes. We were able to check into our hotel before we got our bags from baggage claim — that’s how next level this town is. There were about 100,000 people in the baggage claim area. Only NBA player I saw was Scott Padgett, and I guess it’s debatable as to whether or not he’s really an NBA player.

Our flight landed about an hour late, so we hustled into a cab, busted it to our hotel, dropped all our stuff off, went and picked up our credentials, hopped into a cab…then sat in traffic. Seriously, it cost $7.70 on the meter just to get from the back of the MGM Grand to the front. I’m sure this will be a hot-button topic for those who want to find someone to complain about at All-Star, but I find it hard to be too critical. After all, someone else is paying for me to be here and hit the parties and interview NBA players. Yes, there’s a lot of other people here. Yes, it can be tough to get around. THem’s the breaks, homies.

(Random celebrity sighting: Dave Winfield, alone in a hallway deep under the MGM Grand where they were giving out media credentials.)

We got to The Palms, where the Western Conference All-Stars were finishing up their interview time. I saw Tim Duncan sitting there completely emotionless. A TV reporter stuck a mic in his face and asked Tim what he had planned for the weekend.

“Do you have any advice for those who are hitting the tables?”

Tim thought for a second and said, “Always bet on black.”

I didn’t hear much else from other guys. Every player was asked about ten times if they thought Charles Barkley would outrun Dick Bavetta. Most of them picked Bavetta so they wouldn’t risk his wrath. Understandable, I thought.

When the Eastern Conference players arrived, I walked over to see my man Joe Johnson, but there was nobody at his table. No reporters, no Joe Johnson. Word quickly spread that Joe Johnson had missed his flight from Atlanta. Awesome.

The highlight of the day may have been when Ben overheard a reporter from China approach Caron Butler and say, “In celebration of the Chinese New Year, we are seeing when people were born. When were you born?”

The woman checked her chart and then, as cultures awkwardly collided, she announced, “That makes you a monkey!”

Everyone stood there momentarily stunned, not really sure how to respond. An American reporter told the woman that what she’d said wasn’t considered a polite thing to say to people in America. She explained that being a monkey meant that Butler was resourceful and a good thinker, and Butler smiled and accepted that diagnosis.

Also spotted: Blog hater Sam Smith, with a ticket to the Elton John concert poking out of his back pocket.

We bounced from the interview room to the Hardwood Suite, where Nike was hosting (and feeding) people. It was cool, but once you’ve seen one hotel room with a basketball court, really, haven’t you seen them all? (The name of that room may be the greatest double-entendre in Vegas.)

From there we walked across the Palms over to a different suite to catch up with Gerald Green. The Gerald Green show is ready to go, apparently, despite hurting a tooth last night and having to visit a dentist this morning. He seemed a bit out of it, perhaps because of novocaine, perhaps because he’d lost 18 in a row.

By now it was late in the afternoon, so we headed back to our hotel on the Strip. We had about half an hour to chill then had to hustle back out to the Rookie/Sophomore game, which Sam will be recapping shortly.

The best sighting? As the SLAM crew piled into a cab outside the Palms, we heard a rumble from the folks accumulated outside the doors of the hotel. We glanced over and there was Shaq, in a beige suit, walking around aimlessly. He strolled out from the entrance to the area where cabs were dropping off, and everyone just froze to watch him; he literally stopped traffic. He may not be the player he once was, but dude’s still got it.

That’s where we stop for now. I’m at the Rookie/Sophomore game right now writing this up. At halftime I went up to visit Chris Paul’s family, and I ran into Chris’s mom. First thing she said to me was, “Have you hit the tables?” (She remembered.)

Not yet, I told her, but the night is still young.