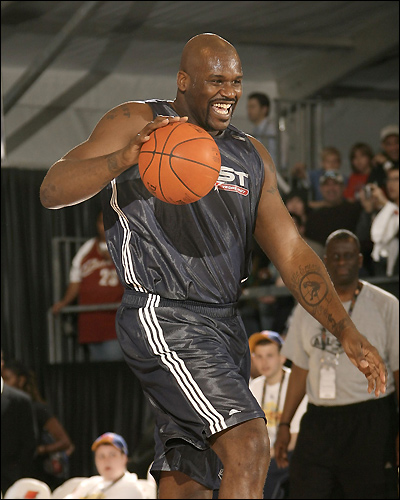 Started off my morning feeling relatively unhungover (word?), which is nice. Hit the media hospitality suite for a decent breakfast and a copy of the Las Vegas Review-Journal. Not to bite Lang’s links style, but there are two amazing discoveries in said paper. The first is in Norm Clarke’s QuickRead column, which seems to be LV’s answer to Page 6. Clarke details the illest party ever, Gary Payton’s Ballers Ball, at which a certified jeweler will be at the front door to test people’s jewelry; if it’s fake, no dice on entry. I’m far from a certified jeweler, but I know enough to tell you that most people trolling the casinos don’t have a prayer of getting into this thing. Needless to say, none of the SLAM crew do either.

The other incredible story—beginning with its headline—in the paper is about today’s UNLV-Utah game, which will be quite the homecoming for UNLV guard Joe Darger. I can’t say anything about it; just read it.

Entertained and informed, I head back to my room, passing Kenny Anderson and an exceedingly average-looking woman kicking it in the MGM Casino. I have already seen players and celebrities with 10 times the Q rating of KA, but that doesn’t lessen the thrill. It’s still Mr. Chibbs!

By 11, Khalid and I are heading for All-Star practice, chuckling as we pass comedian Joe Claire on the way to the shuttle. The shuttle takes us to the Mandalay Bay events center, home to many a prize fight. Our fight is to find the practice court through the maze of the Jam Session (I believe there is a strategy to the way the hotels and casinos make you wind past a million stores and slot machines every time you want to go anywhere, but Khalid and I agree that doesn’t excuse the NBA for not doing a better job of directing people around). We eventually find our way to the court and take our seats for the 45-minute “practice.” Never has the term more warranted quotes; this little Eastern Conference get together is a rehearsal even Allen Iverson could appreciate.

Eddie Jordan (the first Bullets/Wizards coach to be coaching an All-Star team since the late-70’s) and his assistant Mike O’Koren (chatting throughout with injured ex-pupil Jason Kidd) puts the guys through a few four-man weaves and some pick and rolls, but there’s no way a single player breaks a sweat.

Watching in front of us is Craig Sager, who is rocking a plaid sport coat and the new Dwyane Wade sneakers. I know making a joke about Sages’ wardrobe is about as new as stories about Gilbertology, but this get up is really jarring. Nick Cannon is also working the sidelines in a faux 7-11 employees shirt that instead reads “Hustler 24-7,” the absurdity of which doesn’t deter a smiling mother from handing Cannon her tiny baby to hold for a photo opp.

Even with the lack of intensity or even mental dexterity this practice requires from the participants, it’s still cool to watch these guys go through the motions. I mean, you’ve got Dwyane Wade passing to LeBron, who no-looks a touch pass to Shaq for the dunk; it’s just dope to watch these guys together for a few minutes. Speaking of Shaq, he is the star of the practice. When Jordan has them run mini fast breaks, Shaq plays the point. When he’s not on the court, Shaq spends half his time gesturing to some Omegas in the crowd. After about 30 minutes of Jordan directing things, the guys practice their halfcourt shots and throw some autographed gear into the crowd. With a few minutes left on the 45-minute clock, Shaq challenges everyone to a breakdancing contest, kicking things off with a phenomenal (I mean, he’s no Crazy Legs, but given Shaq’s size, I don’t think I’m overstating things) routine that includes extended popping and locking and a back spin. LeBron puts forth a minimal effort on the “dancefloor,” and Dwight Howard shows off his grasp of the dance from the “Walk it Out” video, but none of these cats can compete with Shaq, who caps things off by doing the worm! The next words out of Khalid’s mouth say it all: “What’s gonna’ happen to the League when Shaq retires?” For real, there is no current player who better understands their role as an entertainer.

With even most of the media members wearing a Shaq-induced large grin, we make our way onto the court, where the West players have come out to join the East in open media time. If the thought of a bunch of reporters rushing the court to interview 24 all-stars and the two coaches sounds chaotic, you’re right; but it still ranks as one of my favorite media availability sessions of the year. Unlike yesterday, when you only get access to 12 guys at a time, this is all 24; and there are not nearly as many media members as yesterday. The result is that save for maybe Kobe and LeBron, the 45 minutes of access provide plenty of time to get almost one-on-one time with just about every player. I take advantage and rap with Dirk, Mike D’Antoni, Josh Howard and Ray Allen. I don’t want to tell you all who I was asking about because I’ll want that to be a pleasant surprise when you pick up SLAM 108, but I can tell you what Ray Allen had to say about the person I asked him about. “I’m not the person to ask if he’s a good defender. I won’t say that about anyone because I think I can score on all of them.” Love the confidence.
Happy and contented about all we’d gotten in this media session, Khalid and I break out as the West team begins its own version of practice.