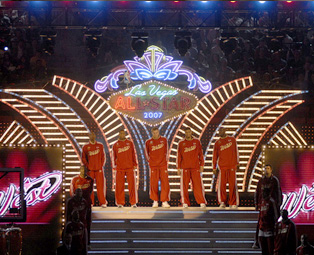 Las Vegas seems to be a place that exists in some sort of wrinkle in time. Remember the villains in Superman 2, the two men and the woman, who have been sentenced to spend eternity inside some sort of strange one-dimensional plane? They’re trapped inside that spinning shard, wearing those skintight black leather outfits, not sure which direction is up or down. In some strange way, that’s exactly what Las Vegas is like. Just without the leather outfits. (Not speaking for Sam, Khalid or Ben there).

Vegas takes your life and makes it its own. For instance, more than once I was running around Vegas and all of sudden realized I hadn’t had a meal in about 20 hours. Or you’re sitting there having a drink and you remember you haven’t slept in two days. As the clock neared 5:00 a.m. on Sunday morning, my hot spell at a blackjack table at the MGM Grand ended and I colored out my chips, cashed them in and shuffled across to the elevators.

As I walked, I pulled out my Sidekick and saw that there were a few messages that had come in over the past few hours while I was playing (when I was not allowed to use my phone). I replied to a text message from a friend, noting I’d had a good night at the tables and that we could speak the next day when we were both rested. I dropped my phone into my pocket, and maybe 2 minutes later I felt it buzz upon receiving a reply back from my friend. at 5:00 a.m. Everyone’s up and at them all the time. Vegas.

How was Vegas as a site for All-Star? Surprisingly great. This was my fifth All-Star weekend, and each year the same two issues cause problems: traffic and people. I say “people” meaning the folks who pour into All-Star’s location each year with no intention of going to the game — they’re there to blow off steam and party, which is cool. They hope they’ll see a basketball player or perhaps a celebrity. And if not, they’ll put on sunglasses indoors and make sure people see them.

One thing that’s bothered me over the last 24 hours is reading stories about how Vegas was inundated by violence this weekend. Really? I saw the arrest numbers, but never saw a shooting, never even saw a fight. In fact, the worst thing I may have seen all weekend was probably just massive amounts of humans, all dressed down with no place to go.

Just curious, has anyone tried to compare the arrest numbers from Vegas with those from Miami during Superbowl weekend?

Traffic, well, that’s another story. Keep in mind I grew up in Atlanta during the Freaknik era, and there I would occasionally find myself swallowed alive by a ton of flashy cars bumping hip-hop. This was a rare occurance in the ’90s, but now kids do this everywhere. And they did it in Vegas. This made getting up and down the strip by taxi nearly impossible, at least at night. But the monorail worked well and we never had any serious problems with traffic. In fact, the tougher problem was usually just getting a taxi — during the evenings, it could take an hour easy to catch one.

The massive influx of people also means parties can become impassable, even when we were on the list for the parties. The clubs would fill to capacity by 11:00 p.m., so if you weren’t in by then, you were outta luck. Friday night’s T-Mac/Diddy party supposedly turned into a human traffic jam well before midnight. The only club I got into after midnight was in the Playboy Tower at the Palms, and that was only because I had peoples in there.

(Aside: Jay-Z’s “Public Service Announcement” from The Black Album might be the most underrated club song of the last five years. Discuss.)

But I’m not complaining. I had a great time. I saw a lot of great basketball. I didn’t pay for a drink the entire time I was there. I got to hang out with old friends and make new ones. I gambled and won. And another All-Star weekend is in the books.

Oh, and the All-Star Game? Interesting, I guess. A lot of people seem to be upset that the game wasn’t more competitive, but that’s mostly because A) the players were all hungover, and B) the Eastern Conference team, other than Gilbert Arenas, all just looked like they wanted to get out of there. More than once I found myself yelling from the press section at players on the Eastern Conference team, trying to get Jermaine O’Neal to box out or Vince Carter to play defense. But the East guys refused to turn it up.

After Sunday night’s late turn at the blackjack tables, I fell into my bed around 6:00 a.m. and woke two hours late to pack my bags. The SLAM fam met up in the lobby of the MGM at 9:30 a.m. (I don’t understand why, but the lobby of the MGM always smells overwhelmingly like liquid soap.) The taxi line was completely manageable, and before long we were on the way to the airport. Our driver was coherent and sensible and only mildly offensive, a rarity among Vegas cabbies.

Arriving at the airport, he warned us it was worse than anything he’d ever seen. Before we could process his words, we noticed people, all over the place, in lines, standing around, angry and frustrated. Several lines of people stretched from the domestic terminal to the international terminal. No seemed to have any idea what was going on. I wondered aloud if Diddy and T-Mac were in charge of planning the airport departures.

Ben and I literally dropped our bags to the ground and sat down to begin planning alternate excape routes, including renting a car to drive to L.A. and flying from there. Then Khalid magically divined which line was the America West line, so we hopped in there, and maybe an hour later found ourselves ticketed and ready to roll. Our flight (featuring Nets GM Rod Thorn in first class, one row in front of me) was scheduled to go from Vegas to Phoenix and then New York. But rains came, the flight was delayed and we ended up sitting on the runway in Vegas for about two hours. If you thought regular travelers could get cranky, imaging a plane full of people who are hungover, sleepless and have each probably lost a significant amount of money. Not fun.

Then in Phoenix, as new, happier passengers got on board, we heard a baby wailing away. It was coming from the boarding tunnel and we couldn’t see the child yet, but we could hear it getting louder and Louder and LOUDER. The baby, toted in its mother’s arms, soon rounded the corner and came barreling down the aisle, screaming loud enough to break glass.

“That baby sounds like it was just born,” Sam said. Of course, swear to God, the mom and baby plopped down in the two seats next to me. Seriously. While we were in Vegas, we’d been able to play with a Zune, Microsoft’s new music player. I thought it was cool and was thinking about getting one. But my iPod saved my life tonight. I listened to music for four consecutive hours and didn’t hear the baby at all. Sorry, Zune.

By midnight we were taxing into New York, and I was thinking about how sometimes Vegas sneaks up on you. I was sitting there playing blackjack Sunday night, slowly padding my cash total, when I realized my contact lenses had turned into sponges. Now it’s Tuesday afternoon, and I’m at my desk in NYC. I have a scratchy throat and a headache. I’m tired. When I was in Vegas none of this bothered me, I guess because of adrenaline or maybe how they allegedly put pure oxygen into all the hotels. I may be paying a price now, but for a few days there, I was one of those villains from Superman 2.

And Vegas didn’t stand a chance.