All The Wrong Moves 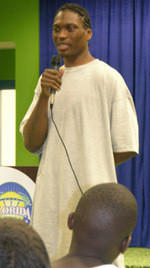 I linked yesterday to a story about how the Pacers seem to be falling apart. And it don’t stop.

Today they traded Austin Croshere, who is finally entering the last year of his contract, to Dallas for Marquis Daniels, who has at least three years and $18 mil. due him.
Croshere will give Dallas a balding big man who can step outside and occasionally hit threes, and he can team with Keith Van Horn to form some wittily-named post combo — Vanilla Thunder?

Daniels wasn’t getting a lot of playing time for Dallas, although he nearly saved their season when he got hot late in Game Six of the Finals. I just can’t figure out how he fits in for Indiana. Daniels has always reminded me of Stephen “Whoo!” Jackson, and everyone knows one Whoo! Jackson is plenty.
For Indy, this seems like a bit of a desperate move. Especially if/when they get Al Harrington from Atlanta. The Central Division is officially becoming the toughest in the League.