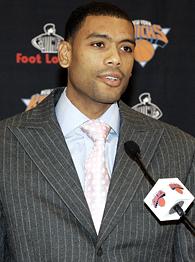 Today being a painfully slow news day, I elected not to go with the depressing Scottie Pippen news as the top post, and instead decided to focus on a (slightly) less embarrassing comeback story: Allan Houston’s.

According to his agent, Bill Strickland, Allan Houston would prefer to return to the Big Apple in his comeback attempt. The man with the ultra-pretty jumpshot has been working out for a bunch of teams lately (most notably the Nets and the Knicks), but if he had his choice, he’d be re-joining Isiah’s band of misfits come November.

But his agent suggested the shooting guard might prefer to return to the Knicks. Houston has also worked out at the Knicks’ facility in Greenburgh several times recently, according to the agent, Bill Strickland.

Although Houston is also weighing the Nets’ offer to attend camp, Strickland emphasized that they don’t necessarily hold an advantage just because they seemingly offer a perk that the Knicks don’t – a chance to win.

I love that the chance to win isn’t particularly important to Houston’s agent. What is important, naturally, is money: As each and every fan of the team knows all too well, the Knickerbockers once signed Allan to a $100 million contract, which remains one of the most absurd things to ever happen in League history.