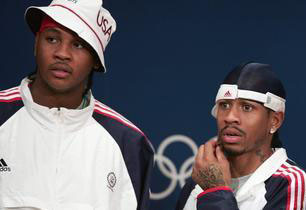 Ok. It’s finally happening. Allen Iverson is going to play alongside Carmelo Anthony. The Nuggets gave up their starting point guard in the process, and I highly doubt they will have a starting backcourt of Boykins and A.I. This means Allen is the point guard, and they have two guys that need the ball in their hands to do what they do.

Iverson has a long track record of 30 ppg seasons, and Carmelo has been basically unstoppable when not suspended or ejected this season, raising his average a full 5 ppg over last year. The last time there were two 30 ppg scorers on an NBA team was when I tried to pull that off with Latrell Sprewell and Alan Houston in NBA Live ’98.

Melo and A.I. will each have to make concessions to their game for this to work. Either that, or the Nuggets are going to start scoring more than Phoenix, while they still have a premier shot blocker in Marcus Camby. As of this moment, they rank #1 and #2 in FG attempts with roughly 24 per game each. Allen shoots more free throws, Melo shoots a better percentage from the field. They’re not exactly an inside-outside combo like Kobe-Shaq, KJ-Barkley, or any of the great ones you can think of. They’re both volume scorers, although A.I. is a great passer when he chooses. Defensively… yeah they should just run as much they can on offense.

Carmelo has never made an All-Star game. A.I. is a lock for the Hall of Fame. Is Melo cool with taking a back seat? He’s been shooting 4 or 5 more shots per game than last season. In my opinion he was having a better season than anyone from his draft class, featuring the anointed twosome of Wade and LeBron. It was Carmelo’s time to be celebrated, as per his SLAM cover. The suspension complicates things, but he’s still been an amazing player this year. Will he be able to scale back to say 18 to 20 shots per game (which is still a crazy amount)?

Allen Iverson is ready to start winning again. But don’t think that means he will automatically defer like Shaq did in Miami. A.I. is as great as he ever was, and he has still never changed himself for anyone. He is the dominant personality on the team, even moreso than the coach. What makes this whole thing really weird is that he gets 14 games of making the team HIS, while Carmelo can only practice with him. Don’t make me say practice, we’re talking about practice?!? Ahhhh…. damn you! You made me say it, and A.I. is involved. It’s kind of like having someone watch your apartment for you while you’re on vacation, and when you come home, he’s bought all new furniture and now you are roommates. We’ll see how this works out.

I’m excited for this pairing, and I hope they can co-exist. Will they battle each other for the scoring title? Who gets the ball in crunch time? Melo has been one of the top clutch players in the league the past few years, but Iverson will have the ball in his hands and he’s pretty clutch himself. Here’s one train of thought: the last time Carmelo played with a guy known for jacking up shots whenever was with Gerry McNamara. How did that work out for them? I’d say pretty effing well. Iverson has never had a teammate like this. Webber was too far past his prime and was never the scorer that Melo is and wil be.

Fantasy repurcussions: There will be many many many rebounding opportunities for Marcus Camby and Reggie Evans.