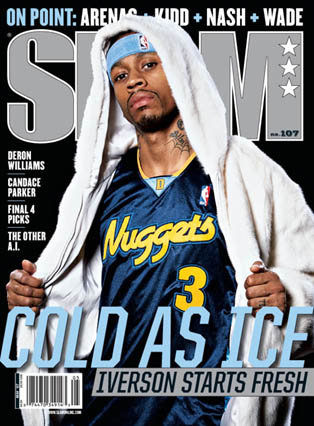 When I went out to Denver in January for this issue’s Allen Iverson cover story, I really had no idea what to expect. Hearing about AI’s lack of media involvement in Philly in recent years, I had to brace for the reality that he might not feel like talking too much. I was especially wary because I went out to Denver right before Melo was set to return from suspension, so the Denver media was in a tizzy about his pending return. This could have been an obstacle because my story was about AI, not Melo. (For those with horrendous short term memory, Melo was on the cover two issues ago.) More to the point, I needed to be ready to cobble a story together without much help from AI himself. What happened was exactly the opposite.

AI was fantastic. He was interesting, he was enlightening, he was even enthralling at times. He was so entertaining that I jokingly told Nuggets’ PR guru, Eric Sebastian (big thanks!), that I felt like I could go to the beach after my first trip to a Nuggets’ practice, and I had three days left in Denver. Of course, it didn’t stop there. I talked as much as I could to AI and his teammates. The Cavs were in town, so I talked to a few of them as well.

AI was so candid; I ended up having to leave a ton of good stuff out of my story. Here is a choice selection of various quotes from various people that I didn’t run in the story but still have relevance:

Marucs Camby, on Denver’s mid-season adjustments: “I think the brawl really set us back. It took two of our veteran players out of the lineup. We had to adjust to that. Then we had trades. We traded Andre Miller, a point guard we’ve been playing with for three years, so we had to adjust to playing with a different point guard, and then Earl Boykins getting traded—it’s just an accumulation of things happening. It’s a good thing those things happened early in the season, not in March and April when we’re trying to make that playoff push. So we have time to adjust.” March and April are almost here and the jury’s still out…THE TIME TO ADJUST IS HERE!

AI, on Steve Blake: “More than talent, I like playing with guys that are tough and guys that just play hard. And that’s the type of player [Blake] is. He’s like a throwback player, just gets out there and willing to do anything to win a basketball game.”

AI, on his big brother/little brother relationship with Caremlo Anthony and what they talk about: “When you have friends and you’re around people, you talk. It ain’t a certain subject you feel like, “Oh, today we’re going to talk about this,” like you’re going to school or something—‘today we’re going to work on this’—it’s just about having a relationship with somebody. You talk about different things. Different subjects come up. I feel like I can share things with him and he can do the same with me. We’re basketball players. And basically, we’ve lived the same life as far as the fame and the money and the beaches leeches; all that come with it. And we talk about things like that.”

Update: I’m an idiot. I just remembered that when I went back to listen to the tape a second time, I realized that Iverson said “leeches” not “beaches.” I made a mental note to myself to fix the quote if I needed to use it for the story. But I didn’t use it, so I forgot about it. When I posted this, the clarification totally slipped my mind. My bad. And I’m sorry, AI and journalism, for the brief misquote.

AI, on SLAM Magazine (I think this was when he realized who I was repping) and doing his, if i’m not mistaken, tenth cover: “I have so much respect for that magazine and they’ve shown me so much love over the years. I’m just always honored to do something with them. They kept it real with me since day one.”

JR Smith, on Allen Iverson as inspiration: “He’s definitely one of my inspirations to play the game of basketball, especially when I was growing up. Just how small he is and how he has such a big heart.”

Fan outside the Pepsi Center: “That’s the thing about AI. You don’t respect him till he comes to your team. And you see all the bullshit he puts up with.”

Allen Iverson’s son to JR Smith: “Mister Boykins, can I have your autograph?”

A little bit more about the story:

–The fur wasn’t my idea. I wouldn’t trust myself with fashion anyway. So big ups to the SLAM creative brain trust that actually got AI to rock a fur coat. And big ups to the 329 animals that gave up their lives to make this happen! KIDDING!

–AI was especially engaging when I asked him questions. I’m still not sure if this was because I asked him more thought-provoking questions, or because he was aware that I was putting together a SLAM cover story, or, maybe, just because…Either way, I got a kick out of asking the questions I wanted to ask and getting responses that more than justified those questions.

–I didn’t feel the need to describe AI’s game because he’s been in the league eleven years now, and if you pick up this magazine or read this website, it’s pretty safe to assume that you know how Iverson plays the game. In case a large rock fell on you 11 years ago and you were just recently rescued: AI is still AI. He still slices across the lane and beats multiple guys off the dribble. He still plays with reckless abandon. He still has that slight, suave fade to his stepback jumper. He’s still dangerous on the break. He still piles up more assists than you’d think, although those numbers come from his monopolization of the ball late in the shot clock as well as his distribution. He still plays the passing lanes like a cornerback. He can still cross you up.

–Part of the cool thing about writing for a magazine is that you get to balance reporting with more creative angles and insights than the ones afforded to regular reporters.

That said, when I started piecing together my AI story and began to try and weave the two central themes together (“Allen Iverson is in Denver, holy crap” and “Wow, look at how quickly we forget how much of an impact AI has had”…more or less), I started thinking about how much Allen Iverson has meant to me over the years. AI has frequently captivated my imagination and culturally affected who I am. I don’t know how many players I can say that about.

The more I wrote, the more emotional the story became. That goes for the humor in it as well. Part of it had to with my true realization that AI was the defining basketball figure of my adolescence, and part of it had to do with witnessing his newfound happiness in Denver.

I really haven’t told you too much about the story because, hate it or love it, I really think you should go cop that magazine.

Bottom line: AI lived up to a cover that he deserved. I only hope I did him justice trying to paint his portrait.