Allen Iverson Has No Illusions About Staying in Denver 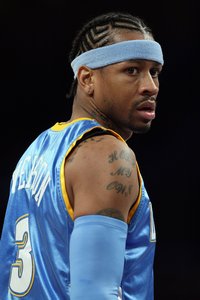 Allen Iverson, at a little over $21 Mil per year, is the highest-paid employee in the Nuggets’ organization. He’s also in the final year of his current deal.

With the Denver front office clearly in full cost-cutting mode, the 33-year old future Hall of Famer wouldn’t be shocked if the team dealt him before the deadline.

From the Rocky Mountain News:

“It’s a possibility,” Iverson said. “We’ll just see what happens. I wouldn’t be upset either way because it’s a business … The one thing about a trade is when somebody trades for you, they want you. That’s what you want as an athlete.”

“My agent (Leon Rose) and my manager (Gary Moore), they let me know (being traded is) a possibility,” Iverson said. “But that’s not something that I concern myself with. I go out and play as hard as I can and whatever happens, happens.”

Denver obviously can’t afford to lose him for nothing when he becomes a free agent next summer, so depending on how the ongoing A.I.-‘Melo experiment turns out in the young season, this will certainly be something to keep an eye on.