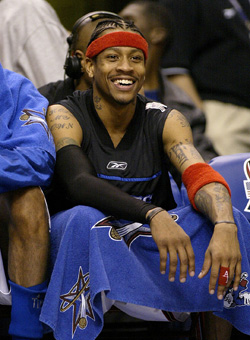 After several months of waiting for a starting gig in the NBA, it appears there’s no market for Allen Iverson in America.

According to Basket Magazine, Turkey might very well be Iverson’s next stop — Besiktas Cola Turka has reportedly made Iverson an offer. The rough translation from The Hoops Market reads, “[The two sides] could be now negotiating the last details of the contract.”

Some reports say the economic terms have already been agreed upon ($1.5-2 million, including large bonuses and a percentage of advertising revenues), and a contract is just undergoing “minor” polishing (AI wants a luxury car, a villa, and to be payed every week, instead of every month).

One of the most dominant players of a generation may soon be taking his talents to the Turkish Basketball League. It’s a changing basketball world, indeed.

UPDATE: According to Woj, there’s a slight snag: “So far, Turkey’s Besiktas hasn’t agreed to Allen Iverson contract request that team can’t fine him beyond 1% of salary”

We’ll keep an eye on this over the course of Football Day for you.