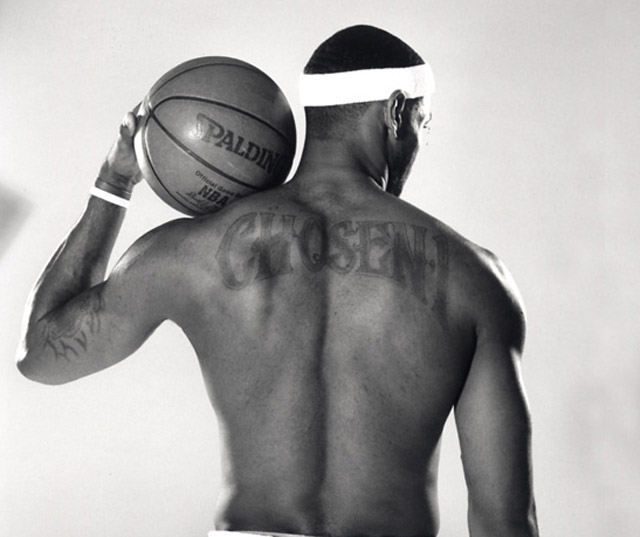 I wrote most of this a few weeks ago when the Soledad/O’BronBron interview blew up. Then I became extremely busy and shelved it because it wasn’t finished. I can’t quantify how much I believe in what I wrote here, but it’s Halloween, so maybe you can try and separate the masks and costumes from the people underneath.

Three years ago, I was at a party in upper Manhattan. I met a girl. She was a friend of my friend’s friend. Almost all of the girls at the party were teachers. Teaching for America. Doing the right thing. Improving the lives of our underprivileged youngsters.

Look at you, sitting there, reading this. You’re steaming. I understand. You can’t believe it. I understand. Not only does Maverick Carter seemingly go out of his way to ruin his best friend’s life, he then bluffs society with the race card, holding a 2/3 off suit.

Oops. I’m sorry. I should have clarified: she said she had drama class with Maverick Carter. This girl said Maverick was a nice guy, too. I don’t doubt this. One national media’s metaphorical Porto Potty is another child’s life-saving fiberglass backboard provider. People are complex like that. Unfortunately, complexity isn’t trending.

If I was rich and famous, you know what I’d do? I’d do everything in my power to surround myself with my friends. I’m happiest when I’m…get this…happy. (You might think that sentence is redundant, but then you’d be insulting all of the people that are happiest when they’re miserable.)

What makes me happy are the things I enjoy: writing (a mostly solitary exercise, regardless of what your Internet friends may be screaming at you), playing sports, various forms of entertainment, and hanging out with my best friends. If you think for a second that I–or you, if you’re happiest when happy–would want to enter the pressure cooker of fame by yourself, you’re delusional. Or Lindsay Lohan.

And if you think some arguably poor handling of fame and a race-based non-controversy controversy is an excuse for one of the world’s most famous people to kick one of his best friends to the curb because he’s ‘being held back’, you don’t understand friendship…especially not friendship born of meager means, forged on late nights in a gym in Akron back when few cared. At the end of the day, when your head hits the pillow, one friend who would take a bullet for you is still more important than eight billion people that wouldn’t.

Fans aren’t friends. Fans come and fans go, like the hot and cold air they blow in your direction. You might miss the soothing breezes their standing ovations generate, but a breeze is a breeze. Temporary. Who stands with you in all types of weather? And if you’re so famous that your boy can–intentionally or not–tweak P.R. weather patterns, all the more reason to laugh about the inflation of this trivial BS behind closed doors.

Trust is earned organically. Friendship is an extension of trust. I spent three years–LeBron’s first three–intermittently covering the Cavaliers for Slamonline. Attended thirty-something games. Between, driving, watching, writing, driving and writing, each game was a 12-14 hour experience.

Amazingly, I’m pretty sure I’ve never met Maverick Carter. Maybe I did once and I don’t remember. Full disclosure: I do, however, remember shaking Randy‘s hand while interviewing some actors Nike hired to play The Fo’ Shizzles. I think Wes was there, too. (We then hopped a spaceship to Neptune and smoked blunts with the spiritual essence of George Clinton, while Dana Carvey played air-guitar riffs of a Jimi Hendrix song that’s so good, nobody has ever heard it. Oh wait…)

Anyway, listening to Brian Windhorst, Akru-weather meteorologist for the Heat Index, go on Cleveland radio and say that he got one exclusive interview with LeBron in seven years because LeBron’s people (read: Maverick) couldn’t control him was…interesting. It also reminded me that, aside from the very rare shooting-the-breeze postgame chat and a few quotes I got for stories I was working on, I did my best to stay out of their way. I mean that literally.

“Hey Jake, do you wanna talk to LeBron?”

This actually happened on multiple occasions.

Now, before you call me the biggest idiot this side of Ahmadinejad, allow me to point out that there’s something inherently awkward about a) being very green and very awkward and b) understanding that, when you value developing relationships organically, a premeditated, organized conversation with the most famous youngster in the country is automatically artificial in nature and predicated on said youngster’s massive fame. Basically, my line of thinking was: he’s a person and I’m a person. If he cared about getting to know the only reporter in his age bracket that wasn’t getting paid to write about Cavs games early in his career, he’d make more than the one effort that I bungled horribly due to wracked nerves. At the end of the day, though, I’m still a writer and he’s still a basketball player, so maybe it’s for the best. Or maybe not. I don’t know.

Now, I’ve never written a LeBron cover for SLAM. Is this because I ‘can’t be controlled?’ I’m not a betting man, but if I was…

And yet I’m not mad at Maverick Carter, the alleged puppet master that supposedly struggles with strings. How could I be? With a steadfast acceptance of compromise, a turkey baster, a networking superpower, and the knowledge of my own awesomeness–reflected back to me through the skewed prism of my own equally awesome friends– I could’ve become LeMahd Rashad. But that’s not me. I’m not a sycophant.

Here’s an exercise: Power Rank the words in the following sentence.

Maverick Carter is damaging the career of his friend, LeBron James.

1) LeBron James: Without those two words, you don’t give a damn about the sentence.
2) Damaging: Danger is implied. You’re riveted. And concerned.
3) Career: Long-lasting danger is implied. You’re even more concerned. This could be a movie.
4) Maverick Carter: So this is the rogue doing all of the damaging! Get indignant! It’s the Internet! You have feelings, too! And they count!
5) Is: Okay, it’s confirmed. The damage is being done. Someone said it. And you watched it. Every single hour of it. Every single 1-hour of it. Therefore it must be true. Because everyone that reports on LeBron James is actually inside of his Maybach, enjoying earnest pillow talk–the Maybach has many pillows– along with a glass of race-baiting Cristal. Yep, if this summer proved anything, it’s that “is” is the most trustworthy word in sports reporting. You can trust all of them. And you do, because they’re more like you than the man you can’t relate to. Now you’re really freaking pissed.
6) His: Wait, so LeBron James on some level belongs to this Maverick Carter fellow? The worst American Maverick since John McCain is running the business life of the best athlete in the country? You’ve gotta be kidding. This is a travesty. If I don’t vent, I’m going to re-enact the opening credits of Mad Men.
7) Friend: Hey, I gotta be honest here. Between Twitter, Facebook and a long conversation with your mom, I’ve already voiced my opinion in multiple forums. Not only that, I have seven new web pages open and I’m G-Chatting with four people about how angry I am. What did you want me to do, again?

Now, pretend to power rank these words from LeBron’s perspective. You can’t really, but just try.

Obligatory Jay-Z lyrical passage that explains everything so perfectly, you have to wonder why people even speculate at all. Oh, right. Not everyone listens to hip-hop.

On the level of sheer coverage and interest, we’ve just embarked on the Internet’s version of the O.J. trial meets Scarface meets basketball, where enemies become friends, and frenemies fight for minuscule scraps of nothingness; kernels of truth nestled deeply in the standard postgame blather.

So I leave you with this: you might be LeBron’s friend’s friend, or the friend of a friend’s friend. Or someone that talks to him and breaks a story. Or a fan. Or my old buddy from elementary school that apparently hosted LeBron and A-Rod at a party in Miami a year ago. (Just think if I had pursued that lead. Maybe the city mouse could’ve won the rat race.)

You just wish you were.

Jake Appleman is a Senior Writer for SLAM and a contributor to NBA.com. You can read more at JakeAppleman.com