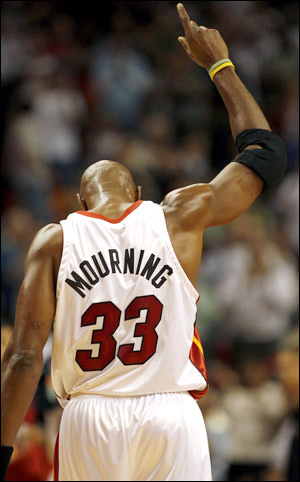 Through all the ups and downs, the injuries and devastating organ failures, Zo never called it quits on returning to basketball. That is, until today. Alonzo Mourning called it a career…and it’s for good.

Mourning was a soldier on the court and had a heart of gold off of it. The Miami Herald has more:

“After 16 years, I truly feel that it is best that I retire from the game of basketball,” Mourning said in front of a sign that read, “Warriors Do Not Live in the Past, the Past is Dead, Life is Now, and the Future is Waiting.”

He then gathered himself and added, “At 38 years old, I feel like I’ve physically done all I can for this game. As God only knows, it’s been an amazing ride. It’s not a sad day. But it’s a day to celebrate. I could think of a million people right now that would love to walk the path that I walked.”

To me, the moment that will forever embody Alonzo Mourning’s legacy in the NBA came last season when he tore the patella tendon in his right knee. He decided to leave by his own will instead of being taken out on the stretcher. That’s Heart. That’s Alonzo Mourning.

He did the Nets dirty at one point in his career, but that was mainly the business side of the League. There will always be much respect for his hustle–whether it was for 40 minutes as a starter or 10 off the bench. Much respect, too, for his charity off the court, ferocious dunks and top-notch defense. All in all, this man was one hell of a basketball player when healthy. Zo will be missed.