We talked March Madness, Miami Heat and more with the Hoyas legend. 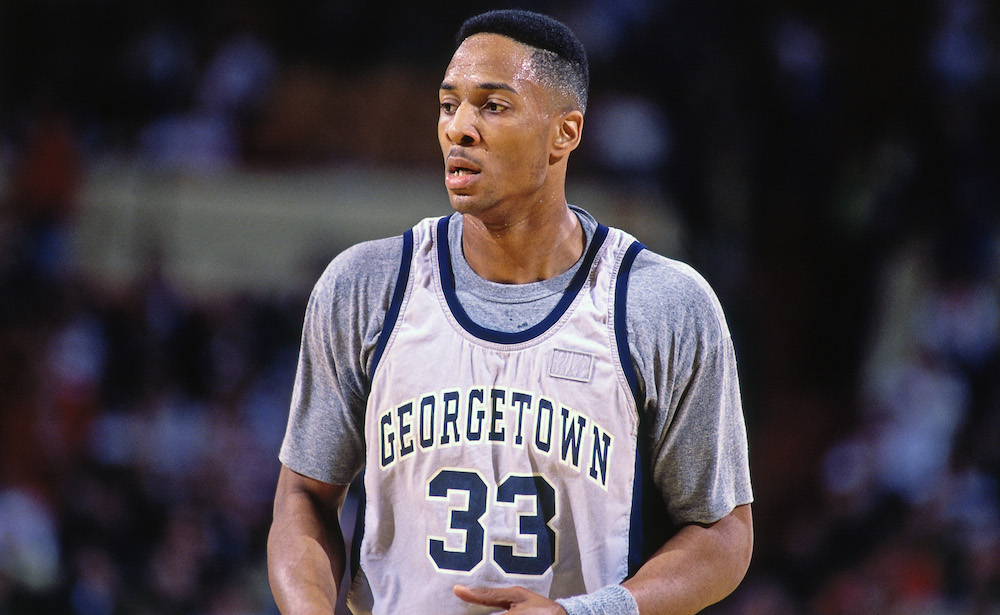 NBA Championship rings tend to shine pretty bright, but for some reason—maybe the lighting in the room when we speak, maybe the way it perfectly complements his dapper suit—Alonzo Mourning’s gigantic, diamond-filled piece of jewelry truly sparkles. With March Madness about to hit full swing, the former Georgetown Hoyas great, seven-time NBA All-Star and 2006 Finals champ (hence the ring) was in Austin this week to speak on Dove Men+Care’s #RealStrength panel, a discussion about the meaning of strength and masculinity with two other former college stars, Jason Collins and Bo Kimble.

Minutes before the panel kicked off, we spoke with Zo—who also works as the Miami Heat’s Vice President of Player Programs and Development—about what to expect in this year’s Tourney, how the Heat are looking as the Playoffs approach, and plenty more.

SLAM: You seem to be a pretty busy guy, but have you been following the college basketball season?

Alonzo Mourning: I have. My son [Trey] is a freshman at Georgetown University, so I do watch. And I love the game of basketball.

SLAM: Do you think anyone can beat Kentucky?

AM: I feel like Coach Calipari has an amazing formula that these kids have bought into. Along with the talent, the depth, the athleticism—and serious depth. When you can go 10 deep into your bench, that gives you a lot of flexibility as a coach. But more importantly, these kids have trusted the system. I’ve seen some very talented teams, but if you don’t trust in the system or believe in the system, it doesn’t matter. Calipari has done a great job with that.

SLAM: So you’re picking the Wildcats to go all the way?

AM: I don’t know. I’m a little biased, because my son goes to Georgetown. And I’m on the Board of Trustees there, and I graduated from Georgetown [laughs]. But I do know that [Kentucky] has the strongest chance of everybody in the field. I think it’s an easy pick for everybody, it really is. But I’ve seen strange things happen in March Madness. When we played against Princeton, it was like David and Goliath. And we almost lost to Princeton, and they were the 16th seed. So I’ve seen strange things. Anything can happen.

SLAM: When this time of year rolls around, do you have specific memories that always come back to you?

AM: That Princeton game [laughs]. That one comes to mind. I remember that moment, and I remember how we came into that game so confident, and yet we were so humble—and we were picked it win it all. We ended up losing in the final eight to Duke, and we should’ve gone on to the Final Four that year. But I’ll tell you, that would’ve been the most amazing upset in NCAA history, if they would’ve pulled it off. And they were close to pulling it off, they really were. They were very patient, and they picked us apart. Then eventually, as the game wore on, I think our strength and athleticism wore down on them and we prevailed at the end. That was a pretty exciting game.

SLAM: That’s also why Kentucky is so highly favored headed into the Tourney—if you have the right big men, when the game gets tight and slows down toward the end, you can just feed it down low. That’s a huge advantage.

SLAM: It’s been a pretty crazy past 10 or so months for the Miami Heat. How do you think the team looks as we move toward the postseason?

AM: Well, unfortunately, we have two keys players out: Josh [McRoberts] and Chris [Bosh]. If you tally that up, that’s about 30 points. That hurts, it really does. So when you’ve got about 30 points on your bench, it’s very difficult to fill that void and become a productive team. But considering the injuries we’ve had to deal with and the 20-something different starting lineups that we’ve had to go through over the course of the season, if we get into the Playoffs and start jelling, start stepping in and performing at the highest level, then we can threaten some teams.

SLAM: The Goran Dragic addition could be huge.

AM: It could be. Significant guys, at their positions, if they start performing and get out of the thinking and just start reacting—it’s a new system for a guard. The defensive system, especially for a point guard, is very tough to grasp in the beginning years. It takes some time. But we have DWade, we have some legitimate scorers, and DWade’s an amazing playmaker. I feel like we really have the capabilities—it’s just a matter of the seeding, getting the right team, and seeing who we match up well against. I like our chances.

SLAM: One of the really impressive things about the Miami Heat is how well the franchise takes care of its own. If you look at the moves the team’s made over the past half decade, whether it’s sticking with Coach Spoelstra when things were tough in the beginning, making sure to bring back DWade last summer, or even giving Michael Beasley another shot, Pat Riley shows so much love to guys who came up within the organization.

AM: That’s a Pat Riley thing. I think that’s the only way to do it, it really is. I think if you’re gonna be a consistent organization, you’ve gotta take care of your own people. You do. Every year, you can’t have turnover. First of all, Spo knows the culture—it’s just a matter of getting the guys to come in and buy into it. We had a great team for four years straight, and the reason why we had a great team was not just because we had the best player on the planet, it’s because we had the best team that bought into a culture. Everybody bought into this culture. After going to the Finals four years like that, I find it very difficult for individuals like we had to stop buying into the culture that got you four straight NBA Finals appearances. How do you stop buying into that? If you got there four years in a row, why not get back there four more times? And then four more times? Why not get back there 10 years in a row? It’s doable. And Pat Riley wasn’t gonna stop bringing pieces in to complement, you know? So why walk away from a dynasty?

AM: [Laughs] Yeah. That’s the question. Why walk away from a dynasty when you have to go somewhere and rebuild, basically? Then you’ve got Kevin Love, who’s not happy at all. He’s outta there.

SLAM: It’s just different priorities, right? It’s the mindset that the NBA Championship isn’t everything, that there’s more to it than that.

AM: Evidently. It had to be. It’s very difficult to even think about walking away from something like that. How do you walk away?

SLAM: Where do you think Kevin Love is going to go? LA?

AM: I think he’s probably going to go to LA. I could see that.

SLAM: Tell me a little about the #RealStrength campaign you’re working on with Dove and why you’re participating in this SXSW panel.

AM: With Dove Men+Care, we’re exemplifying what real strength is all about, with March Madness and this campaign—it kind of magnifies how the definition of “strength” has changed, from the standpoint of our fathers and our grandfathers—how they depicted it—until now. Times have definitely changed, and there’s different aspects of what we feel strength is. You ask eight of 10 men, they believe masculinity has changed since their father’s generation—it truly has. There’s so many different ways of showing your masculinity other than being aggressive and taking an aggressive approach. I feel like me showing my masculinity and me showing my strength, I do that through caring for my children. That’s something that my father did not show me. So I make an extreme emphasis on the characteristics of passion and love and caring and all those particular things—those words define strength.

SLAM: Have you seen the idea of strength change in the context of the basketball world over the past 20 or so years?

AM: Yeah, I have. I’ll tell you: When you think about when we were growing up, our fathers weren’t expected to show affection. I have friends of mine who have told me, Hey, my father never told me he loved me until I was much older. I think now more than ever kids are thirsting for that, they want that type of nurturing. It makes all the difference in their overall approach to the decisions that they make in life. When you think about athletics, you see more hugging before games. You do. Then they get after it and get after each other, but before games, you see it.