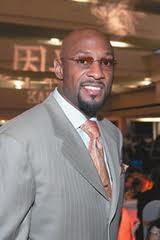 When Alonzo Mourning speaks, it’s time to listen. The former Georgetown Hoya and Miami Heat great commands your respect. He is a champion, a philanthropist and a survivor. If you don’t learn anything from a conversation with this man, that’s on you.

As a brand ambassador for Gatorade, Mourning is able to share his knowledge of athletics and the World with a new generation of athletes. Last week in Hollywood, CA Mourning attended the Gatorade Player of the Year awards with 11 amateur athletes, including high school basketball stars Jabari Parker and Breanna Stewart. While on stage that evening, Mourning stressed to strive for excellence as athletes and humanitarians.

SLAM: Congratulations on winning a title as an Executive. How does it feel winning from the other side?

Alonzo Mourning: Obviously it’s a lot less strenuous. [Laughs] Now it’s just the mental strain and you want what is best for the organization and the guys. It’s a proud moment because I have a great relationship with all those guys, so I felt like a big brother.

SLAM: I loved when they would show you and Riles in the stands during the Finals. Didn’t look like there was much talking going on between you two.

AM: We talk, but we talk under our breath—one word so people don’t read our lips. It’s just the competitive nature of both of us. I got a lot of him in me through those years of him coaching me. We were just so focused on the prize.

SLAM: On the stage tonight, you mentioned how proud you were of LeBron for getting through the adversity. What did you mean by that?

AM: For an athlete of his caliber, you think about the unfair criticism he has received. Very much so. You think about how much pressure he put on himself. I wanted this for him more than anything because I wanted to shut everybody up. Because the past couple years I got a chance to know him. People on the outside that don’t know him, they spew all these things about this man without understanding who he is and what he does to prepare himself to play the game of basketball. I think he’s done so much for basketball, especially for a guy that hasn’t won multiple Championships—he’s done a lot for the game, he really has. Right now, he’s at the level, without the multiple Championships, he’s at the level of Michael Jordan globally. You go anywhere around the globe and mention LeBron James, people know who he is. It’s the same thing with Michael Jordan, so it’s at that same level of fame and popularity. He places a lot of pressure on himself to perform and adversity really introduces a man to himself. I think all of us from the organization saw a maturation process evolved throughout this year—especially during the Playoffs. When he was able to tap into that, you saw extreme greatness explode. It had a contagious effect on his teammates because it brought out the best of guys and people did not expect them to perform that way. If you look at Shane Battier, how Mike Miller stepped up in the clutch and Mario—the list goes on. Guys came in and there was a collective resolve and its a thing of beauty to watch—winning four games in a row against a very tough opponent.

SLAM: Coach Riley mentioned that now LeBron will play as free as he ever has. What do expect to see from him next season?

AM: The sky is the limit. It truly is. The world knows what he is capable of doing when he’s focused and puts on the approach he had in Game 6 against Boston. When he does that on a consistent basis, watch out. The comment that Pat made, yes I agree. He is free now. He’s able to exhale but the hunger is still there. Now it’s about continually building your legacy and God willing he stays healthy, the best is yet to come.

SLAM: I know you caught some of the fashion that we were exposed to during the Finals from guys like Russell Westbrook—

AM: It’s a different element, man. These kids are different.

SLAM: You’ve always been a very stylish individual yourself. Always suited, looking sharp. How does putting on a nice suit make you feel?

AM: First of all, when you put on a suit, it shouldn’t feel like you have a suit on. It’s like having on a t-shirt and jeans. So I don’t feel restricted when I have a suit on, it feels good. A lot of young guys feel uncomfortable when they put a suit on. I feel extremely  comfortable and I believe traditionally speaking, as a businessman being part of a billion dollar corporation, the National Basketball Association, and you have all of these small corporations within—so you have to carry yourself as such. It’s a mentality that evolved through my days in college and the influence John Thompson had on me. So I don’t know any other way. In my college days traveling with the team, everybody was coat and tie when we traveled, it wasn’t sweatsuits on the road. It’s a part of my DNA and now that I’m on the business side it becomes natural to me. With the younger players it’s a different mentality. Everybody has their own style and it’s whatever you’re comfortable with. As they get older and as they fall into more of a business mind, they will understand the importance of this actual approach.

SLAM: Do any of the styles out there shock you?

AM: No, because you are dealing with 19-20 year old kids. They left school after one year. There is nothing wrong with that. It’s just what they know.

SLAM: The Heat have not wasted any time in free agency. You guys have already signed Rashard Lewis and Ray Allen. What goes on during a Miami Heat free agency pitch?

AM: The main pitch is we’re a professional organization. We have a championship organization, we have leadership. Pat Riley has created a family atmosphere and we invest in our players and their families to succeed. So that’s the perfect sell. When Pat makes that pitch, that’s enough. I really don’t have to do anything but show up. Straight up. The long and short of it: Pat does his presentation and veterans who understand winning, they buy into that. It’s as simple as that.