Amare and His Damn Knees Again 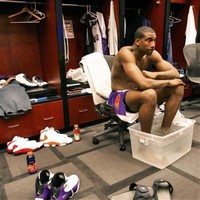 The good news, if you can call it that, is that it’s not the same knee which he had microfracture surgery on in 2005, causing him to miss almost the entire 2006 campaign.

This morning in Phoenix, Amare Stoudemire will undergo arthroscopic surgery on his right knee; an MRI revealed “a loose body” in the knee. Last April, Stoudemire had an arthroscopic proecudre done on the same knee to remove debris and a cyst.

Steve Kerr, the new Suns GM, is trying to stay optimistic in light of this somewhat shocking news, and even hints at the star forward being ready for the season opener. From the East Valley Tribune:

Steve Kerr said results from an MRI taken Sunday clearly showed what the problem is — and the team is confident Stoudemire with miss just two to three weeks and has a good shot at being ready for the Nov. 1 season opener at Seattle.

“The pictures are totally different this time. It’s obvious to anyone who looks at the pictures what is causing the inflammation and what needs to be done,” Kerr said. “He is confident that this will be a routine procedure and given Amaré’s age and great condition that he will bounce back very quickly.

“We’re not going to be stupid about it. Right now, we’re expecting him to be ready for the opener. But if he’s not, that’s fine, we’ll take every precaution.”

It’s important to keep in mind that when Amare underwent the dreaded microfracture procedure – which, except for a slight loss in explosiveness, he had fully recovery from last season – it had started out as a “simple scope” too.

This could end up being just a routine operation, or it could signal an end to the Suns’ title hopes this season before it even starts.