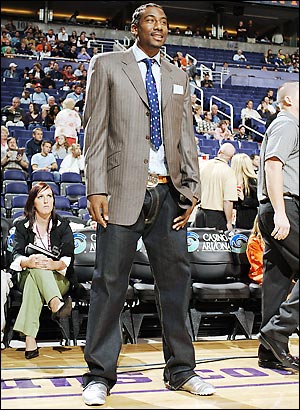 Here we go again. Amare says that he’s ready to roll (according to him, he might even be too ready), but many signs indicate that he isn’t. Not only has he pulled himself out of practice twice since training camp began, he missed the exhibition game against Lottomatica Roma last Friday (which Phoenix won 100-93), and there are even rumors circling that things aren’t all that peachy between him and the rest of the Suns.

Stoudemire believes he’ll be ready to play and dominate later this afternoon (3 p.m. ET, ESPN 2) when the Suns play the Sixers in Cologne, Germany. Phoenix coach Mike D’Antoni has been happy with his star forward’s progress and said that if Amare can have another strong showing in practice before the game, he’ll play. How long he plays, of course, is another story.

So, who should we believe here: the overly optimistic player (Amare), or the warning bells? Personally, I’d like to believe the big fella, because when healthy he is one of the most enjoyable athletes to watch in any sport. My gut, however, tells me this is Grant Hill all over again. I hope I’m wrong.