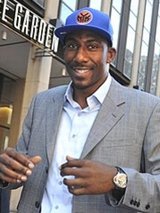 “The Knicks are back,” Amar’e Stoudemire declared to a group of reporters outside of Madison Square Garden yesterday, a few minutes after verbally agreeing to a max deal with New York.

The contract won’t become official until Thursday, but the deal calls for the Knicks to pay STAT approximately $100 million over the next five seasons.

Due to understandable injury concerns, the Phoenix Suns weren’t willing to commit to five fully-guaranteed years with Stoudemire, and after the power forward rejected their advances, the Knicks were able to quickly swoop in with their max offer.

And, well, let’s face it, turning down $100 mil and all the opportunities playing in New York offers a star athlete just wasn’t going to happen.

Amar’e immediately becomes the biggest star to join the Knicks in about a decade, but you have to understand the team’s fan base not being totally satisfied.

The signing doesn’t represent a major turnaround for the franchise. Stoudemire needs to help his new front office bring in another prized free agent or two this summer. Otherwise, the Knicks will go from being terrible to simply interesting. Not exactly “back.”