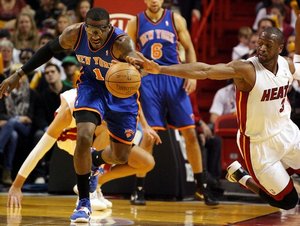 Even before Carmelo Anthony joined him to form a superstar tandem in New York, Amar’e Stoudemire never shied away from expressing supreme confidence in the Knicks, and seemed to take great pleasure in throwing darts at the Miami Heat.

Not much has changed on STAT’s behalf coming into the 2011-’12 season, a year in which Stoudemire has plans of taking his Knicks past Miami’s own super-squad.

The NY Post captured a funny, yet telling moment in the Knick locker room last night, as Stoudemire boasted to his teammates about what he expects them to do this season:

Rest assured, LeBron and Wade aren’t any less cocky or self-assured than Amar’e, they just choose to talk their trash on the court instead of through the media. To each his own, I suppose.

The Knicks/Heat rivalry has a chance to be really special over the next few years. Both are young, very talented teams, and the expectations in both New York and Miami are enormous.

The first game between these two squads will take place on January 27th in Miami. Let Hunting Season begin.

(UPDATE: Word about this got to Dwyane Wade, and he responded to Amar’e on Twitter this morning: “@Amareisreal I got those ‘hunting’ tips for you. Hit me on the cell L2MS.”)