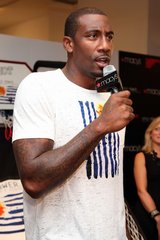 Like every other NBA player, Amar’e Stoudemire is unhappy with the prospect of missing out on games. Should the lockout drag on over the next year, or (heaven forbid) even longer, STAT thinks the players should form their own league.

Stoudemire — who’s optimistic about the lockout ending soon, by the way — says that if playing overseas isn’t an option for some of the guys, why not create a competing entity to the NBA?

[Stoudemire] said he had received calls about playing overseas, but was not considering them. But he also said that if the lockout dragged on he “may entertain it more and more.” He then offered a more ambitious idea. “If you don’t go to Europe, then let’s start our own league,” he said. “That’s how I see it.” He said such a league would only happen if the lockout “goes one or two years.”

“It’s very, very, very serious,” he said. “It’s just a matter of us strategically coming up with a plan and a blueprint and putting it together. We want to play N.B.A. basketball, but if it doesn’t happen, then what are we going to do? Sit around and not do anything. So we got to figure out ways to now play basketball at a high level against top competition and have fun doing it. So that’s the next step.”

There’s no doubt that, if they were truly serious about this new league idea, NBA superstars could convince some sponsors to hop on board.

However, considering the long-standing relationships the L already has with the players’ biggest potential allies in corporate America — media conglomerates, sports apparel companies, marketing firms, etc. — it’s impossible to imagine that Stoudemire and friends would make anywhere near the kind of money they do in the NBA, to say nothing of the logistical nightmares that come with organizing and running an entire sports league.

The entrepreneurial spirit is noble and all, Amar’e, but the best thing for everyone involved here would be to quickly end the lockout, and get players back into NBA gyms.