Anarchy in the G.S.! 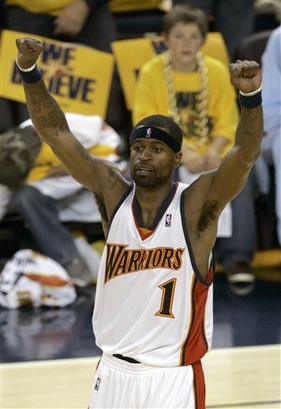 I have slept, thought about what transpired last night, and I still don’t believe it. The last coherent thought I can recall is that if the Baron Davis injury is what puts an end to the amazing Golden State run, then life just is not fair. But that is why the Warriors were a lowly eighth seed in the first place, because Baron can get hurt and go on the shelf at any minute. His come back, as obvious a comparison to Willis Reed as it is – was Willis Reed. When a guy on one leg is hitting leaners for three when the intention was to draw a foul, there are bigger things happening. Russ and Ben Collins were all over the game notes late last night. Though they wrote quickly to keep up with the hectic pace in a timely fashion, their thoughts will make more sense than mine, cause my brain is scrambled.

The Gully State Warriors. An eighth seed full of rejects and psychopaths, have demolished one of the best regular season teams in NBA history. Here is a brief summary of the regular season and what many of us thought as it dragged on:

1. Phoenix and Dallas are superior to everyone else. The Phoenix-Dallas WCF is going to be legendary.

2. I hope San Antonio or Houston or possibly Denver do not ruin the Phoenix-Dallas WCF.

3. It would be kind of cool if Golden State got to play Dallas in round one, cause of the Nellie factor. Maybe the Warriors can win? Ha ha, no that’s crazy talk.

That’s it. That was the NBA season. We are not getting the Dallas-Phoenix 7 game classic, and don’t need it! The Oakland crowd was at it again and Dallas lost their nerve in the third quarter. Jerry Stackhouse and Josh Howard tried to fight through it and keep their team alive. I don’t want to pile on Dirk, cause there will be plenty of that this summer, and the insults will come stronger and stronger. My one thing about Dirk has nothing to do with him personally, but I’d like to know who’s idea it was to make 7 footers become perimeter players. Isn’t the whole point of being seven feet tall that you don’t need to take jump shots to score? The evolution of the 7 footer as a jump shooter is a case of basketball development people getting bored and looking for ways to switch up their training programs. Smaller players should be fast and skilled and good at shooting. Bigger players should beast out. That’s the natural order of things. Call me old school if you have to.

I feel the pain of the Dallas fans, in particular one Ben Collins. The same Ben Collins who wrote…. THIS! Talk about digging your own grave and falling into it.

Growing up, sports was not this crazy. Wild card teams did not win the Super Bowl. Cecil Fielder hit 50 home runs and was treated like Babe Ruth. Michael Jordan never lost. In recent years we’ve had a team break an 86 year drought against its blood rival by overcoming a 3-0 series deficit, NFL teams going from worst to first year after year, a QB that was working in a grocery store come on the scene and play like Dan Marino, Florida beating Ohio St. in the college football championship as the biggest upset since Texas beat USC the year before which was the biggest upset since the Patriots won a Super Bowl with basically a rookie QB against the aforementioned grocery bagger who had become the dominant player in the league by then. The NBA has been more stable. Spurs dynasty, Laker dynasty, the biggest aberration was the Pistons winning with team play and scrappiness. Now, with the 8th seed beating one of the best regular season teams ever, the NBA has entered that “This has never happened before and it should not again but it will” zone. Nothing is sacred.

Looking forward, how is anyone supposed to win a game in Oakland? Their fans are the best. Last week I put the thought out there that they remind me of the ’02 Angels fans. All of us with our East coast bias just assumed the Yankees would fly out there, throw the talent out on the field and take care of business. The Angels had stolen a game at Yankee Stadium, and then out in Anaheim there were thundersticks and rally monkeys and a rabid fanbase that I never knew existed. They smacked down the Yankees twice, played a forgettable series against the Twins that I have no memory of, and then in the World Series, Barry and the Giants had the lead late in game 6 until the rally monkey and the fans took over and the Angels were champions. The Oakland fans are a lot like that. I thought people from California were supposed to be laid back duders.

I hope this all made sense. It might not, but then again nothing does anymore. Congrats to the Oakland faithful, to Nellie, to the Warriors. You have entertained us all!

Oh, and Ak-47 was back and now there will be a game 7 of Utah-Houston on Saturday night. I have committed to watching the Pretty Boy Floyd-Golden Boyahoya fight, and by committed I mean $$$$$. Life is tough.