And 1 hits the ATL 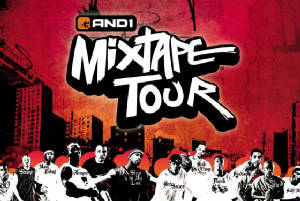 The And 1 Mixtape Tour rolled through Atlanta this weekend, and our correspondent DeMarco Williams was in the house to take it all in…

Before I go into my And 1 game summary from Sunday, I wanna give a shout out to Mandy Murphy, the do-everything media relations head at the shoe company who took care of me lovely at the game. Going beyond providing choice tickets for me, my lady and my lil’ cousins, Mandy allowed us onto the floor, VIP-style, to meet the guys and take a few pictures. The kids loved it all so much that the 40-minute ride out to the Gwinnett Arena (in the Atlanta suburb of Duluth) became an afterthought when Escalade handed them some complimentary rally towels. Good lookin’, And 1!

Okay, now to the in-game observations…
— The guy I did the Slam Streetball piece on, “The Air Up There,” broke a finger a few weeks back. Needless to say, he’s in street clothes. That’s sad ‘cuz I really wanted folks to see what all the fuss is about.

— Though the parking lot was pretty packed, there are lots of empty seats up top. The lower level, however, is pretty amped. DJ Drama (of Gangsta Grillz mixed CD fame) and some other cat are the wheels of steel. Kids got bananas when Young Joc, Young Dro or any other “Young” MC who snaps comes thru the speakers.

— The play is hella sloppy in the first part of the first half. The Atlanta team playing against And 1 is actually looking pretty good. Two cats called (I think) “Circus” and “Electric” are doing their thing. Circus goes the extra mile in his attempt to woo the And 1 players by making some sort of jersey-popping gesture whenever he does something nice — which ends up being quite often.

— R&B sensation Chris Brown is not only in the building, he’s on the And 1 bench. Dude smiles non-stop. He gets in a couple of time. Though he shots (and air balls) only once, his hustle and defense are actually rather decent. Chirs gets props for going out there and shrugging at the fact he might embarrass himself.

— My lady is really into the Pharmacist. While I’m not worried about her running off with son at halftime, I am a bit worried at that smile she gets every time he and Chris break out into some wacky dance.

— Speaking of dancing, BHI (“Do it, Do it”) and E-40 are the halftime entertainment. I can’t say I’m really big into the whole Bay Area hyphy movement, but I can’t front on the energy the music has. When “Tell Me When To Go” comes on, the crowd goes nuts!

— Main Event and this one cat from the Atlanta squad get elbow friendly a time too often and one of the referee tosses Main. He’s not happy about that and lets the zebra know it. Players have to get in between the two. Half-Man/Half-Amazing doesn’t like the call either. Ref tosses him, too. C’mon, fellas, it’s just a game.

— Anthony Mackie, star of the new movie “Crossover,” is watching the game courtside.

— Darius Miles doesn’t play in the game but he does sit on the Atlanta team’s bench.

— And 1 rallies in the second half to create enough space between them and the ATL squad to win by three.

— Chris Brown is still smiling as he walks off the court.