I met Andre Drummond two years ago after a Detroit Pistons home game.

He had just seen me in the movie Now You See Me and asked if we could make a short video together where he would stand in front of me and say, “Now you see me” and then step aside to reveal me, and I would say, “Now you don’t.”

I was kind of embarrassed to promote my own movie so I played my role with a lack of enthusiasm to let viewers know this was Andre’s idea. Andre, however, played his role to the hilt. What I didn’t realize was that this video, for Andre, was not the first time he intended to perform with me on camera.

I thought it was strange because I’ve always thought of playing in the NBA as the ultimate life goal—I wanted to play in the NBA ever since the combination of Muggsy Bogues and Danny Schayes gave every tiny Jewish kid in New Jersey false hope. For me, acting was life’s consolation prize.

Andre Drummond wanting to be an actor felt to me like Neil Armstrong wanting to pilot a 747—he has already accomplished life’s greatest goal and now he wanted to take a Drummond-sized step backward. Nonetheless, we exchanged telephone numbers and stayed in touch.

In the time since we met, Andre has taken improvisation classes and declared a minor in Drama at UConn, where he’s getting his Bachelor’s.

I hadn’t seen him in a while and I’ve been staying in Southern Indiana so, in early January, I drove to Indianapolis to watch his Pistons take on the Pacers. Before the game, Andre and I met for lunch at a Japanese restaurant in downtown Indy (six small pieces of sushi—his pre-game ritual—is apparently enough for one of the League’s most threatening big men). 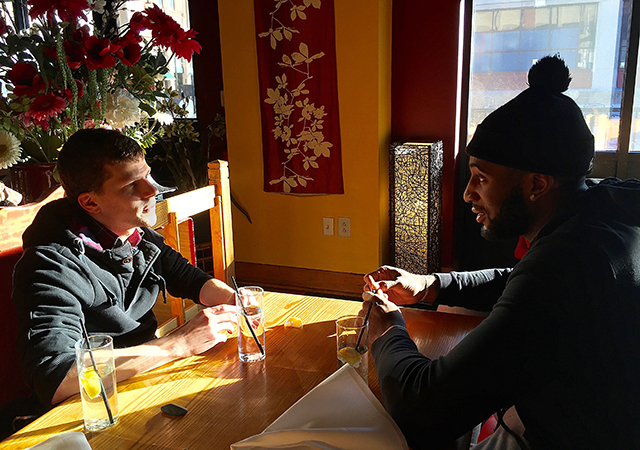 Right when we sat down to eat, a man in a Pacers hat approached us and asked for our autographs. We signed the same sheet of paper, our names mirroring our statures: Andre’s autograph was big and dynamic with a number sign in the middle of a loop (his jersey is No. 0); my autograph was kind of apologetic and in the corner.

And I thought that anyone who sees that piece of paper would wonder what the hell the connection is between Hollywood’s least dominant actor and basketball’s most dominant center.

But during our lunch, I realized we were kind of cosmic inversions of each other.

When I started acting in movies, I stopped watching them—I became hyper-aware of the artifice and it made me self-conscious. So, instead, I filled the void by watching basketball. I have NBA League Pass and am more likely to watch a pre-season Pistons game than any movie I’ve been in. Andre is the same way—or, rather, he’s the opposite. He doesn’t recreationally watch basketball, but he did see my movie, American Ultra, four times in one week.

And our work ethic is the same, even though mine allows me to weep on cue and his allows him to bench press a tanker. I recently finished acting in a play I wrote, performing eight shows a week, and my increasingly bizarre pre- and post-show routine seems eerily similar to Andre’s regimen. He avoids socializing before (and often after) games, travels to them alone and cocoons himself after a loss, watching movies to relax. Similarly, before a performance, I spend the day alone, trying (mostly failing) to distract myself from the anxiety of the upcoming show and, after a bad performance, I hole up with League Pass to get my mind off the disappointment. We’re not bar-hoppers, serial daters nor strip clubbers (we both grew up in houses full of strong women who schooled us in respect).

We both donate money to causes that are important to us—Andre’s creating a foundation to help teenagers afford college and I work with a domestic violence shelter—but otherwise, to quote Andre, we “invest our money wisely and live like we’re broke.”

Comparing processes and life philosophies (we both agreed that “performing with a chip on your shoulder is the difference between being good and being great”) gave me one of those strange reminders that people who really care about what they do are pretty similar, even if one of them is a foot shorter and 150 pounds lighter, wet. Talent is unreliable; effort is not.

“My mom. Just checking in. I’ll call her back in a minute.”

I thought it was funny that Andre’s mother was calling to check in. He doesn’t seem like the kind of guy who needs to be checked in on.

But I guess, neither do I. Still, when I checked my phone after dropping Andre back at his hotel, I had a few missed calls from my own mother—probably just checking to see if I was alive.

A few hours later, at Banker’s Life Fieldhouse, the Pistons lost to the Pacers in a competitive game that ended when “Paul George decided to enter the three-point contest in the fourth quarter.” (Andre’s words.) Andre matter-of-factly earned his 29th double-double (in 34 games) with 11 points and 18 rebounds.

Watching Andre in the paint reminded me of Woody Allen’s adage, “80 percent of success is showing up.” Most of the time he muscled his way in to grab a rebound, but sometimes, almost magically, he was just in the right place when the ball came back to earth. 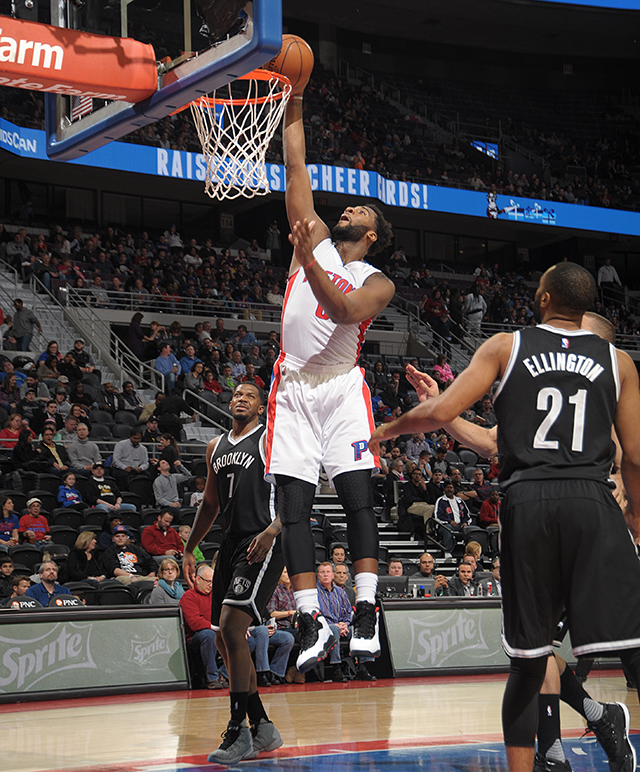 When a call didn’t go his way, he didn’t argue with the refs (like his coach, who got ejected from the game) nor pity himself—he just ran down the court to show up on the other end. He was just a man at work.

And this is how I feel about my life in my very unpredictable profession. I am never sure (and usually wrong) which movie or play is going to turn out well, but I treat every performance like it’s the most important one.

So although I’ve never actually seen Andre Drummond act, I think he has the right mindset for a life in the arts—show up, bring your A-game and sometimes the ball might come right to you.

Photo of Andre and Jesse via Anna Strout; other images via Getty/NBAE