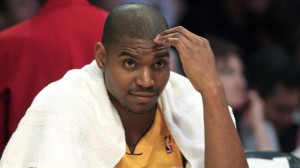 The Los Angeles Lakers may not win the NBA title this year, but they are without a doubt, the champions of drama.

A couple nights after the infamous fourth quarter benching of Kobe Bryant by head coach Mike Brown, it was Andrew Bynum’s turn to ride the pine for not sticking to the game plan.

Early in the third quarter against the Golden State Warriors last night, Bynum inexplicably jacked up a three-pointer, which enraged his coach, and resulted in the big fella barely seeing the court again for the rest of the game.

A defiant Bynum told the media horde following the Laker victory that he didn’t truly understand why he was benched, and promised to launch even more three pointers in the future.

Brown yanked Andrew Bynum from the game early in the third quarter after the center badly missed a three-point shot, though Bynum appeared amused on the bench as he mimicked the form on his release. “That’s something that I thought could have taken us out of rhythm, so I took him out of the game,” Brown said.

Bynum sat out the rest of the third quarter and played only 2:50 in the fourth quarter, finishing with 11 points and five rebounds in 23 minutes. “I don’t know what was bench-worthy about it,” said Bynum, who indicated he wanted to continue taking shots from beyond the three-point arc. “I made one [Sunday] night and I missed one tonight.” Did Brown talk to him about the shot? “Not yet,” Bynum said. “I’m sure he wants to.”

Andrew Bynum has attempted 4 threes so far this season, and actually connected on one. He claims that this is a part of his game that intends to develop going forward.

May God help us all — and may he especially help Mike Brown.