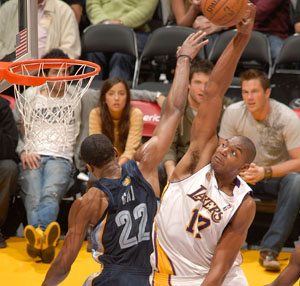 I’m sick of looking at the NBA Draft Live Blog photo. You get this here now.

Bynum can get a contract extension this summer from the Lakers. When his agent was told that Bynum suggested he would be willing to take less than the maximum of five years, $80 million, David Lee said they would be seeking the maximum.

“He was talking as a 20-year-old,” Lee said in a telephone interview Monday. “He had not consulted with his representatives. I think the Lakers know how we feel about this.”

“I don’t think the Lakers have anything to worry about with Andrew’s physical condition,” Lee said. “The only thing is he wants to stay in the purple and gold. It’s in their court.”

Okay then. Yes his agent is David Lee. “Talking as a 20-year old.” Good one.
HT: Fanhouse