Andrew Wiggins Wants to Play for the Toronto Raptors 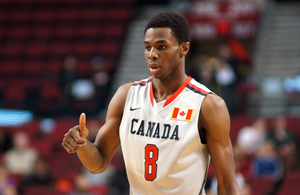 Barely out of high school, and already, it could be argued that Andrew Wiggins is the most promising basketball talent that Canada has ever produced.

After winning the Gatorade High School Athlete of the Year Award Tuesday, Wiggins told reporters that his preference would be to play for the Toronto Raptors once he makes it to the NBA.

Per ESNEWS (via the Toronto Sun):

“I would like to say the Raptors, I want to play for them,” said Wiggins, who has been spotted many times sporting a Raptors cap. The team would need quite a bit of lottery luck in order to make Wiggins’ wish come true, but there’s always free agency down the line.

Wiggins, a Thornhill native, averaged 23.4 points, 11.1 rebounds and 2.6 blocks per game for Huntington Prep in West Virginia in his final high school season.

It would take a near-miracle for Toronto to land Wiggins, the likely top pick in the 2014 NBA Draft. The Raptors are a young team on the rise, and don’t appear to be in tank mode moving forward (though their fans and front-office probably wish they were now.)

Andrew Wiggins will put in a year of service at the University of Kansas before making some down-trodden NBA fanbase very happy. It likely won’t happen near his hometown, however, despite his wishes.