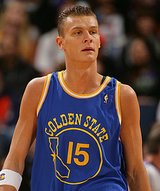 Andris Biedrins had a tough season last year. His team was awful, for starters. And then things began to really go south when his coach, Don Nelson, started to criticize his free-throw shooting.

And the wheels finally came off when the big fella’s body betrayed him, and he went down permanently with an abdominal tear.

Biedrins opened up about everything, and really let loose with some Latvian media. The blog Warriors World did us all the solid of translating the goods.

Read the entire thing, but here are some highlights:

On outsourcing his off-season training and rehab: “The franchise naturally tried everything to keep me in, because if I had surgery early on then I might have missed the entire season. We felt like the team made me play to quick after the first injury; so we decided to go our own way on this – our doctors and experts.”

On NBA culture: “The NBA is basically the second most popular sport in America after football. It’s just the mentality there. I can tell you right now, about our team, most of my teammates are egoists. But what can you do?”

On Nellie commenting about his free-throw shooting: “When he said I should practice underhanded; I felt very disrespected. At one point I spoke to a Psychiatrist who reminded me of some things, but it’s not so bad that they send you and try to brainwash you.”

I love it when foreign NBA players head back home, and do these type of interviews. They’re always so much more candid with their own press than the American one.