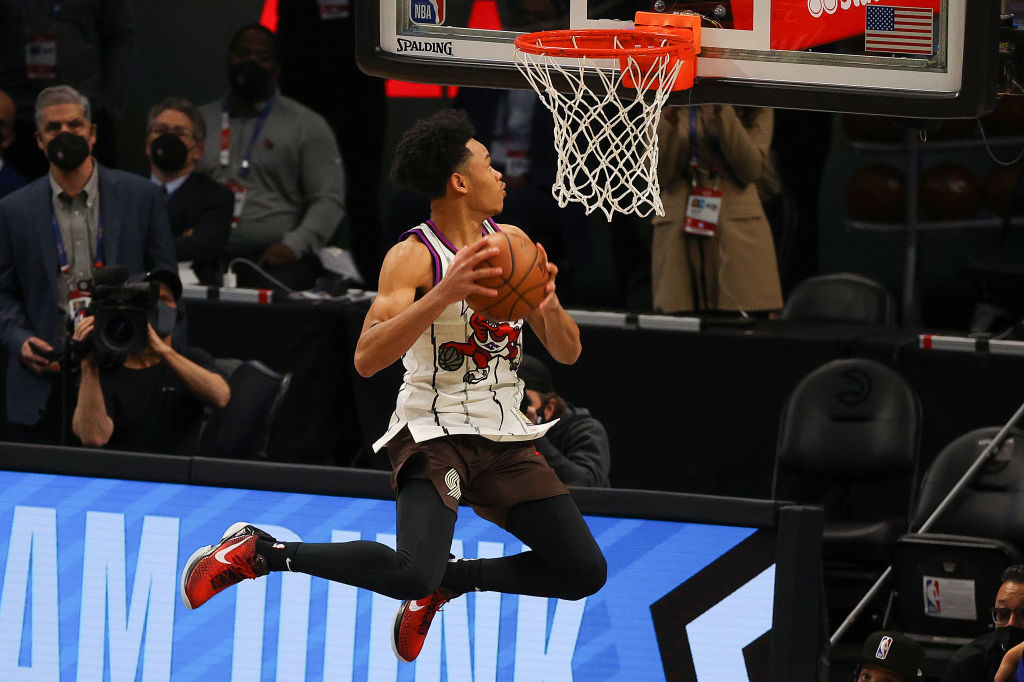 In what turned out to be a solid showing for all contestants, Portland Trail Blazers guard Anfernee Simons won Sunday’s AT&T Slam Dunk Contest to become the first player in franchise history to win the award. Simons, listed at 6’3,” is the fourth player 6’3″ or shorter to win the award since 2010, joining Nate Robinson (5’9″), John Wall (6’3″) and Donovan Mitchell (6’0″).

While Indiana Pacers guard Cassius Stanley wasted no time putting on a show with an explosive move that saw him go between-the-legs with the same leg he jumped off of, his first-round dunk only received a surprising score of 44.

After New York Knicks rookie forward Obi Toppin showed off his Amar’e Stoudemire-like hops with a two-handed reverse tomahawk that gave him a score of 48, Simons would follow Stanley’s dunk with a creative flush that saw him grab a ball from a mini hoop above the rim for a score of 44.

Stanley, possibly effected by his controversial first-round score, would perform a run-of-the-mill dunk in the second round that led to a score of 37 and virtually eliminated him from championship contention.

This would leave Toppin and Simons to battle for the Slam Dunk crown, with Toppin starting off the affair by taking performing a windmill dunk while jumping over teammate Julius Randle and his father. Missing his first attempt, Toppin would earn a 46 on his second attempt.

Simons would then proceed flight in a vintage Tracy McGrady jersey, paying homage to T-Mac’s popular dunk from the 2000 Slam Dunk Contest. An exhilarating 360-degree jam, it was undoubtedly his best dunk of the night and earned a deserving score of 49 from the judges.

In the final round of the Slam Dunk Contest, Toppin would break out a simple between-the-legs dunk that was outshone by a consistently creative Simons. On what was one of the most discussed dunks of the night, Simons would lob the ball to himself and appear to kiss the rim as he dunked.

Although ensuing replays showed that Simons didn’t in fact kiss the rim, his flair and showmanship was enough to get him a 3-2 edge in the judge’s final vote.

While the Slam Dunk Contest has consistently been maligned as stars opt not to take part in the once illustrious event and contestants find it increasingly difficult to be original, this particular Dunk Contest was notable because of this year’s judged. That being said, Simons earning the respect of former Slam Dunk champions like Dominique Wilkins, Josh Smith, Spud Webb, Dee Brown and Jason Richardson should be impressive from any perspective.

Following his win on Sunday, Simons would call the experience “surreal” and a “dream come true.”

Following the contest, the NBA announced that Simons, Toppin and Stanley had raised an additional $350,000 for the Thurgood Marshall College Fund (TMCF). Slam Dunk Contest sponsor AT&T committed $100,000 to the TMCF’s COVID-19 HBCU Emergency Fund, which will help students that attend a Historically Black College or University or Predominately Black Institution.