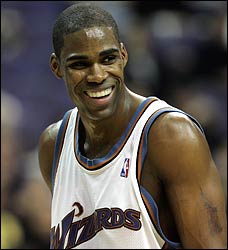 The Washington Wizards were decimated by injuries last year, won less than 20 regular season games, and failed to qualify for the Playoffs. If they can stay healthy next season, and maybe even win a series in the postseason, it would have to be considered a major success.

That wouldn’t be good enough for Antawn Jamison. The Wizards’ leader has much loftier goals.

“I’ve been around here for six years and championship talk wasn’t a norm around our locker room. That’s all we’re talking about now,” Jamsion said, with less than two weeks remaining before training camp. “If we stay healthy, I think we can compete with the upper echelon of the NBA.”

“I don’t care,” Jamison said. “What you mean raising the bar too high? We won 19 games last year and I’ll be honest with you, we didn’t have a lot of our horses. But I don’t have anything else to play for. I’m not going to sit here and sugar coat things because it’s not the right thing to say. I believe it.”

Everyone around the Wiz insists that Gilbert Arenas is all the way back, and should that be the case, it’d be good enough for this team to return to the postseason. But a championship?

Sorry, Antawn. Your team simply doesn’t have the horses to go all the way. Good attitude, though.