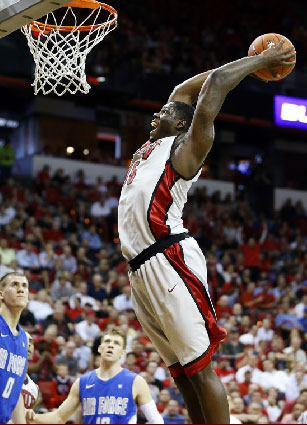 Wizards fans are used to disappointment. We’re familiar with the feeling of momentary optimism followed by heart-wrenching depths of despair. “Things Fall Apart” might as well be the team tagline (oh, you preferred “New Traditions?”). And yet, here we are again, presented with a new opportunity to get our hopes up. We do it each year around this time, and each year it seems real.

John Wall played near All-Star levels when healthy. Bradley Beal, if not for injuries of his own, might have given Dame Lillard serious run for Rookie of the Year honors. Other pieces, like Martell Webster, emerged as real parts of a winning puzzle down the back half of the season. And the Wiz even cashed in at the Draft Lottery—an event at which Washington fans by now expect to get shafted on a yearly basis—jumping up from No. 8 into the top three.

Dare I say it: This time around, there could be a legitimate Playoff team on the horizon. I say so cautiously, but only because of the name atop the team’s roster.

That said, there’s still a way for Wizards GM Ernie Grunfeld to screw this up. Because, well, he’s Ernie Grunfeld, the only GM in the League who could hold onto his job for a decade performing as poorly as he has; Washington’s latest trip to the Lottery was its fifth straight.

If there is a God, he’ll let Otto Porter fall to No. 3, where he is a no-brainer selection for the Wizards. Or, perhaps even if Cleveland does go for OP (don’t do it, please don’t do it *Drake voice*), the Magic will take a guard like Trey Burke or Ben McLemore, leaving the Nerlens Noel project to the Wiz.

Seeing Porter and Noel go 1-2, though? It’d be an abject disaster.

Not necessarily because of a lack of potential upside in the third-best player in this year’s Draft class, whoever it may be. But because forcing Grunfeld to figure out who that guy is from a second tier that might include up to a dozen players is about as frightening as it can get for Wizards fans.

With the third pick in the 2013 SLAMonline Mock Draft, the Washington Wizards select…

The irony here, of course, is that had the Wizards not vaulted to the No. 3 pick via the fortuitous bounce of a ping pong ball, they may still have had the opportunity to take Bennett, since—as we’ve already seen in our own mock draft—this year, more than any in recent memory, there is no real consensus on how the top picks will shuffle out.

I don’t expect both Porter and Noel to be off the board when Washington goes on the clock at No. 3. But stranger things have happened. And there’s definitely some strange ish going on in that Cleveland front office. So if that’s the way it goes down, and the Wizards don’t trade the pick in a lack-of-Porter panic, Anthony Bennett can go ahead and slip on a red, white and blue uni and settle into his locker next to Nene.

Burke, the only point guard in the mix this high, is off the board, with respects to John Wall. And while I’ve enjoyed watching Shabazz Muhammad’s high school mixtape as much as the next guy, I’d much prefer to watch his NBA career play out with another team. Cody Zeller? I’ll pass.

That leaves two ways Washington could lean. One, go for a big like Bennett or Maryland’s Alex Len. Or two, if the team feels that McLemore or Victor Oladipo is far and away the best talent available, draft a third guard and figure out a way to fit him in without upsetting the Wall/Beal backcourt dynamic.

Bradley Beal has already proven that he can be a starting shooting guard in the League. No matter what you think of McLemore and Oladipo as prospects, they’ve yet to prove anything in the pros. Beal has. And if you select a guard, well, it’s either to come off the bench, or play small at the 3, surrendering a mismatch every night on a defensive-minded Wizards squad.

Then there’s this: On 2013 Draft night, Oladipo will be 21, McLemore 20. Beal won’t turn 20 until the following day—and he’s the one who’s shown he can score in the L. Neither McLemore nor Oladipo stacks up to Beal, no way.

All of which leaves Len and Bennett as the best bets for DC in this situation. Both are working through injury issues, though both should be dealt with come Opening Night 2013.

Len, a 7-1 import from Ukraine, is long, has nice athleticism and good footwork. He has the physical tools to eventually be effective on defense, and already a soft touch on offense. He’s probably a lock to be a decent center, sure. To me, though, Len’s upside is limited.

If it’s a big the Wizards want, they need a banger, not a finesse player. They need someone willing to mix it up, someone who can body and bruise the opponent, and might dunk on your face, too. Hello, Anthony Bennett.

Bennett’s upside is as high as any player in this year’s draft class. He’s already a great offensive rebounder, finisher and shooter for his position, and he’d be a perfect running mate in the open court for Wall. He can score inside, he can score outside, and he can attack off the bounce. Experience-wise, he played in the ’09 and ’10 FIBA World Championships (for Canada).

I’ll take Bennett’s unique combination of size and skill, and his 20 ppg NBA potential over Len’s ceiling as a starting center, even if he has had passive defensive efforts in patches—something that hopefully, at the urging of Wall, Beal and his coaches, can be fixed.

Bottom line is, while my man-crush on Porter is well-documented, if he or Nerlens can’t be had, I’m rolling the dice on a potentially potent big in Bennett, rather than upsetting or supplanting what is for once in several years a rosy Wizards’ backcourt situation. If Bennett hits big, Washington could finally find itself back in the postseason. If he fails in epic fashion, Washington could finally fire Ernie Grunfeld.

Either way, it’s change we can believe in.