Arenas’s Future is Tied to Jamison’s 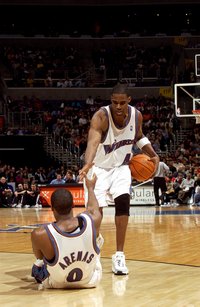 Re-iterating what he said months ago, Gilbert Arenas has once again let it be known that if the Washington Wizards don’t re-sign teammate Antawn Jamison this summer, then he’s a goner, too.

The future is the future. I want to be back in Washington, but weird things happen in free agency. If Antawn is not back, then there’s no point in me coming back because he’s part of my success, too.

When you’re doing pick and roll with a player like him, they can’t double you, they can’t trap you because you have a pick and pop guy who can shoot the three at your four position. My success is because of him too. If he doesn’t come back, I’m not coming back.

So, there you have it. The work for the Wizards’ front-office has been cut out for them. And hey, no pressure, Antawn. Your decision this summer is only a potentially franchise-changing one.

If Gil is healthy – and that’s a big if – I don’t see how Washington doesn’t try to keep their Big Three together this summer. The Wizards may have played well without Arenas’s services this season, but I’m not convinced they’re a better team without him (especially on the offensive end.) And last time I checked, 25+ points/game scorers don’t exactly grow on trees.