Ron Artest: Does That Make Me Crazy? 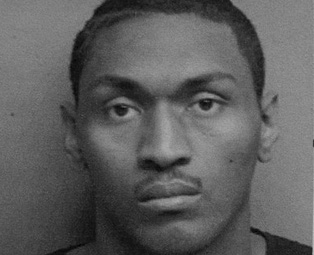 The reason Ron Artest is in the news again today is because, rather predictably, he’s in trouble. Word broke yesterday that Ron Ron had been arrested and charged with domestic violence. Today more details are being reported, and some of it is pretty incredible stuff. Putting this together as best I can…

• At some point on Monday morning, Ron Artest got into an argument with a woman. The woman is believed to be his wife, but in domestic violence cases the police do not release the name of the person making the allegations.

• Artest ran out of his house and hopped into his Hummer. According to a neighbor, the car was in reverse attempting to leave.

• The door of the house opened and a woman ran out with a frying pan. A frying pan! She then used the frying pan to smash the windshield of Artest’s Hummer.

• Why the anger? Because, allegedly, Artest shoved this woman to the floor during an argument and snatched a telephone away from her when she tried to call 911.

• At 9:23 a.m. yesterday morning, someone managed to call 911 from the Artest house in California. The police arrived and found Artest waiting on the front lawn, describing Ron as “very calm, cooperative.” After talking to Ron, they arrested him on suspicion of violence.

That’s where we stand right now. Honestly, considering Ron has a rap sheet as long as my…well, it’s long, it’s not that much of a surprise. (The most surprising bit may be that you can shatter a Hummer windshield with a frying pan. Who knew?)

When the Kings traded for Ron Artest last year, they knew what they were getting themselves in for. And it’s been one long, bumpy ride, involving questionable injuries, complaining to the media, an underfed dog named Socks and now this.

Last year, as the Kings were getting set to trade for Artest, I went to a Kings game and wrote the following on The Links the next day…

Last night in the Kings locker room, one of their players asked me if I knew Ron Artest. I told him I did, sort of.

“Remember JR Rider, and how much trouble he was?” I said. “Ron Ron is a lot like that, but times ten.”

I went on to explain that there is a pretty significant difference, though. JR Rider caused his fair share of trouble, sure, but he had kind of a vindictive spirit about him. Ron Ron just seems to stumble into trouble, like a cartoon character getting into some dopey weekly hijinks.

And the people in Indianapolis realized this. They liked the person, they just didn’t like what he kept getting himself into. After all the crap he put that organization through over the last four seasons, look at how the Pacers’ front office responded to him leaving:

Larry Bird: “We’ve done everything we could here to try to get him to feel like he’s needed and wanted, and it just didn’t work out.”

Donnie Walsh: “We wish Ron the best at Sacramento. There’s no doubt in our mind he’ll have an immediate impact on their team. We’ll miss him very much.”

Seriously? Has there been a more disruptive player in the NBA in the last decade? And that’s how you send him off? Wow. But that’s the kind of response that Ron Ron creates. You want to help him, you think you can help.

So many of Ron’s issues just seem like common sense things, where he could avoid all this trouble if he would just pause and think about it before reacting. So you think, “Hey, we’ll think for him. We’ll hold his hand and keep him from going to far. We’ll tame him.” As Donnie Walsh said, “If anything, I’ve probably gone too far with Ronnie because I felt like he was going to learn how to do things. At that point, which I thought was true, that as long as he was here, anything he did would get blown up and affect his teammates and affect everybody.”

The problem is, I think he does think before he reacts. He just doesn’t choose the right decision. How will he fit in with the Kings? I have no idea.

As I was talking to this Kings player last night, I said, “At least you guys have a lot of veterans, so maybe you guys can kind of strongarm him to keep him in line. I looked around the room and saw guys like Mike Bibby, Brad Miller, Shareef Abdur-Rahim…and Bonzi Wells. Whoops.

One year later, and the song remains the same: People love Ron’s spirit, they just don’t like they way he behaves, or, rather, misbehaves. Constantly.

The Kings have suspended Artest (with pay) indefinitely. As of this morning, they’re a game-and-a-half out of the final playoff spot in the West, but the longer they’re without Artest, the further their chances of playing in the postseason drift away.

People are already weighing in, saying this should be the end of the road for Artest, if not in the NBA then at least with the Sacramento Kings. Which, to me, would be disastrous for Ron Artest.

I don’t know Ron well enough to provide any kind of groundbreaking psychological insight, but I do think that the only real hope for Ron turning into a consistently productive member of society is that he needs to be surrounded (inundated, really) with support. And he needs to realize that he’s wrong. He’s wrong to hit other people, he’s wrong to constantly react the way he does. Like a child, he needs to have someone with him to always remind him to think before he acts.

At some point with Ron Artest, it’s going to become about something bigger than basketball. It hasn’t happened yet, though, because as long as he can back smaller forwards down in the post and defend positions one through four, Ron Artest will remain a puzzling bundle of promise and spirit.

And some team will always have a jersey for him.