As Date With Team USA Looms, Australia Is Vaguely Confident 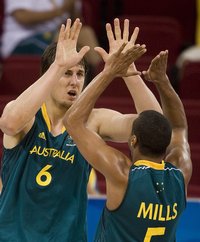 Pool play is over and done with, and after romping through much of it, the ‘Redeem Team’ is entering the medal round.

Their opponent tomorrow morning is the only team they haven’t managed to blow out of the water this summer (a result made all the more significant by Andrew Bogut’s absence in their last meeting); perhaps buoyed by that fact, the opponent is (somewhat) confident heading into the matchup.

Goorjian was then asked: Can the Aussies possibly beat the Americans?”I don’t know if we can or can’t. I just like the way we’re playing, and I want to play that way. What I’ve seen on TV, I don’t even want to look at the tapes.”

Not exactly blackboard material for LeBron and company from the Aussie coach, but the Americans say they’re well aware of how dangerous the guys from down under can be, and promise to be ready.

Team USA has averaged 103 points per contest in Beijing so far, and has enjoyed a margin of victory of 32 points.