The Ballad of Joe Barry Carroll 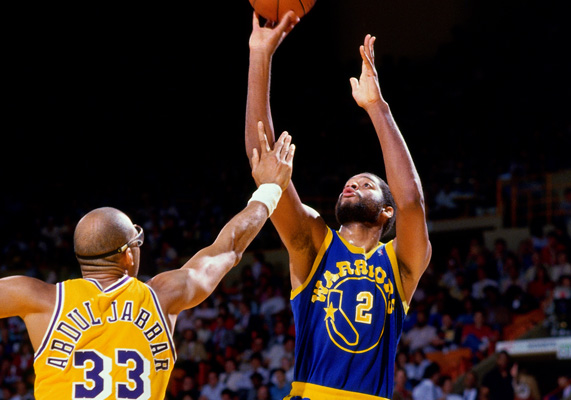 Some would blame bad luck. Others would shake their fists at the heavens. True to form, Joe Barry Carroll is philosophical about it.

“Nobody could have foreseen what would happen,” he says. “A great deal of professional basketball, as in life, is the sort of serendipity of it all. You come out and you take your chances.”

Serendipity, in this case, means becoming arguably the best player in NBA history to be written off as a mediocrity. It means being the centerpiece of one of the most infamous trades since the Dutch acquired Manhattan for nutmeg and beads; a trade that both CNN and Deadspin rank as the fourth most lopsided in sports history. It means becoming known by a particularly damning sobriquet: Joe Barely Cares.

In pro sports serendipity is a zero-sum game, and Joe Barry Carroll always seemed to be on the wrong end of it.

Even as statistical analysis revolutionizes the sport—and Carroll’s stats were good—his historical standing has not improved with time. More than 30 years later, his bizarre career—and the trade that began it—remain severely misunderstood.

It’s widely believed Carroll was the consensus No. 1 pick of the 1980 Draft—but that’s wrong. The top three picks were seen as a toss-up, and the Celtics, who owned the first pick, had already settled on Minnesota power forward Kevin McHale. Carroll, a center who had led Purdue to the Final Four, didn’t become the No. 1 pick until the eve of the draft.

That night, Carroll’s agent, Bob Woolf, knocked on the door of Carroll’s hotel room to inform him that the Celtics had sent the Golden State Warriors the No. 1 and No. 13 picks in exchange for fifth-year center Robert Parish and the No. 3 pick, with which the Celtics would still draft McHale. The Warriors would make Carroll the top pick.

Carroll was elated by the news, but in the long run serendipity was on Boston’s side. Almost needless to say, Parish and McHale teamed with Larry Bird to win the NBA Championship the very next season, and would win two more in an epic battle for League supremacy with the Lakers. Today both are enshrined in the Basketball Hall of Fame. Carroll went to a franchise that Parish later likened to an “outhouse,” and was constantly measured against the two Hall of Famers for whom he had been acquired.

“The fans never forgave him for that and you couldn’t blame them,” says former San Francisco Examiner NBA beat writer John Hillyer. “Even if it wasn’t his idea.”

It’s also widely believed that Celtics chief Red Auerbach, one of the game’s all-time great coaches and executives, inveigled the Warriors into believing Carroll could singlehandedly turn around their franchise. According to NBA.com, the League’s official website, “On June 9, 1980, Red Auerbach pulled off the type of trade that had earned him a reputation for thievery in his more than three decades in the League.”

In truth, Auerbach didn’t have to work hard to persuade the Warriors—they had little choice.

The trade began to take shape near the end of the ’79-80 regular season, when the Boston-based Woolf scheduled a call with Golden State’s management team. Not to talk up Carroll, but to discuss a contract extension for one of his other clients: Robert Parish.

Parish hadn’t been an All-Star in the four seasons since the Warriors drafted him, but had averaged a respectable 17 points and 10 rebounds over the previous two seasons in a Western Conference loaded with tough centers, including Moses Malone and Kareem Abdul-Jabbar. The following season, ’80-81, would be the last year on his deal, after which he would become a restricted free agent. This meant that the Warriors could match an offer from another NBA team to retain him, agree to a sign and trade, or let him walk. Woolf, a mega-agent whose client list also included Bird, Dr. J, and Boston sports legends Bobby Orr and Carl Yastrzemski, had no intention of letting things go that far.

According to Al Attles, the Warriors’ coach/GM at the time, Woolf proposed a contract extension at a “home team discount” that was slightly less than what both sides agreed Parish could obtain in free agency.

“He (Woolf) wasn’t mad or anything,” Attles says. “He just let us know that if we couldn’t match that figure then Robert wanted to go.”

The call was probably little more than a professional courtesy, because everyone knew the Warriors were cash-strapped. “We didn’t lose Robert Parish because we wanted to trade Robert Parish,” Attles says. “We lost him for financial reasons. We couldn’t afford him.”

In 1980, longtime Warriors owner Franklin Mieuli was among the last of a dying breed: a local entrepreneur who operated an NBA team as the family business. More and more, the League had become the territory of super-rich owners for whom owning a team was a long-term investment or a matter of prestige. Mieuli couldn’t keep up with the new generation’s spending.

The issue became common knowledge in 1977, when two of the Warriors’ best young players departed as restricted free agents. Point guard Gus Williams went to Seattle, where he won the Championship in 1979 and later had his number retired. Jamaal Wilkes, a future Hall of Famer, joined the Lakers and played a key role in their 1980 title run.

Fans could smell the rot, and by 1980 attendance had shrunk in each of the past three seasons.

The only thing keeping the Warriors out of a death spiral was the creativity of its management team. Coach/GM Attles, then one of the 10 winningest coaches in NBA history, led a group featuring the legendary Pete Newell as head of scouting. Nobody knew more about big men than Newell, a Hall of Famer and founder of the eponymous Big Man Camp whose attendees included Hakeem Olajuwon, Shaquille O’Neal and Bill Walton.

Now they were going to lose their center, and unable to afford a veteran at the NBA’s most valuable position, it was up to Newell to find another one in the Draft.

“Back then the game was played from the inside out,” Attles says. “Centers were a high priority.”

According to Attles, Newell believed Carroll and McHale would both become All-Stars, but that McHale’s best position was power forward. “Kevin McHale,” recalls Attles, “was a forward who could play center.”

The Celtics had lucked into the top pick as a result of acquiring and then dumping former MVP Bob McAdoo within the space of seven months. They already had a center in future Hall of Famer Dave Cowens, so when 7-4 Virginia center Ralph Sampson elected to stay in school, McHale became their primary target. Earlier in the season, Auerbach tipped his hand when he personally told McHale he’d like to draft him, something he hadn’t said to anyone else except Sampson.

The Jazz, who had recently relocated to Utah from New Orleans, held the second pick and needed to engage their new fan base. They would take Carroll if he was available, but would draft the spectacular Darrell “Dr. Dunkenstein” Griffith over McHale with Carroll off the board, making it possible for the Celtics to trade down and still get their man.

As the Draft—and the trade—took shape around him, Carroll, a soft-spoken economics major, remained an enigma. In the media, GMs and scouts speaking off the record said he had talent but lacked intensity. This was in part because of his on-court manner: He had a loose-limbed, jaunty walk, and typically wore a stoic expression.

“I’m not a rah-rah, fist-up-in-the-air guy, but I enjoy the game,” Carroll told Sports Illustrated in a rare interview arranged by his college coach in 1980. “Only, when I’m out there, I tend to keep things inside me. I think a lot, and that may be why some individuals perceive me to be timid.”

Yet he was a mobile defender and a good shot blocker. Offensively, he scored with a well-developed mix of post moves, jump hooks, and midrange jumpers. He was not a perfect machine like top-drafted centers such as Jabbar or Walton, but he usually made the right play at the right time.

“He played as if it were a chess match, rather than it being purely athletic,” remembers former Warriors beat writer George Shirk.

Carroll’s introversion also contributed to his PR problem. If NBA teams wanted to know what was going through his head, they were going to have a hard time finding out. Even Carroll’s Purdue teammates described his off-court demeanor as quiet and cerebral, and he didn’t speak to the media unless severely cajoled.

None of this mattered to the Warriors. They needed a starting center, and for the five years of his rookie contract, Carroll would come at a price they could afford. They also added a mid-first-round pick in the transaction, enabling them to fill another hole in their lineup on the cheap. Little convincing was needed for Attles to offer up a player—Parish—who he couldn’t stop from leaving in the very near future.

For his part, Parish was thrilled to move from Golden State to Boston, describing it as going “from the outhouse to the penthouse” in a television interview. Auerbach told the media that Carroll and Parish had similar college statistics and would make similar pros.